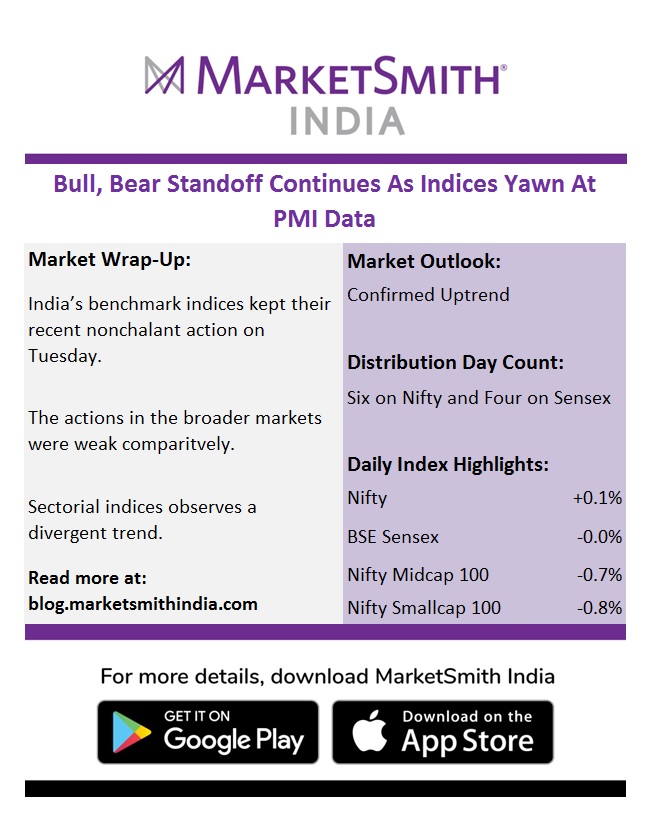 India’s benchmark indices kept their recent nonchalant action on Tuesday, as the key indices once again spent the entire day near the unchanged line. Following the release of the closely-watched Nikkei India Manufacturing Purchasing Managers Index (PMI) data, stocks continue to show lacklustre performance in the second trading session of 2018.

During the trading session, the Indian Government released the factory activity report for December, expanding at a faster pace in five years. As per the report, PMI rose to 54.7 in December (versus November’s 52.6) improving at a strong pace since December 2012. The manufacturing sector also witnessed higher payroll figures in December.

While considering the broader market, both the Nifty Midcap and Smallcap ended on a negative note, declining 0.71% and 0.76%, respectively.

The market breadth, which indicates the overall health of the market, was also in favour of losers today. On the NSE, 521 stocks advanced and 1,055 stocks declined. A total of 28 stocks remain unchanged.

The MarketSmith India IND 47 list declined 0.59% as most of the names in the index ended on a negative note. However, among all the names, Himadri Special surged the most as it sprinted 9.77% on higher volume.

On the daily chart, both the indices are trading well above its 50- and 200-DMAs, close to their all-time highs. Therefore, the Indian market outlook remains at a Confirmed Uptrend with the distribution count of six on the Nifty and four on the Sensex.