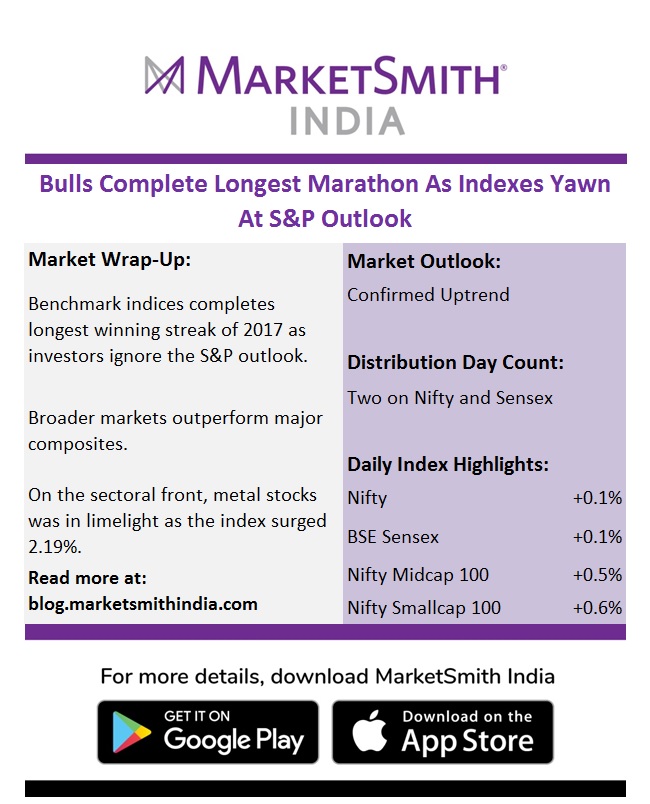 The Indian market started the expiry week on a negative note, after the S&P global ratings agency Standard & Poor’s Ratings Services on Friday retained India’s ratings at BBB-and outlook stable. Despite few dips in the afternoon session and hitting an intraday low, both the indices managed to close on a positive note. This is the eighth straight session, where both the benchmark indices closed in the positive territory, completing the longest winning marathon of 2017.

Today, the Nifty Midcap and Smallcap continued to extend their gains with 0.51% and 0.61%, respectively.

The market breadth, which indicates the overall health of the market, was in favor of gainer today. On the NSE, 860 stocks advanced and 586 stocks declined. A total of 47 stocks remain unchanged.

The MarketSmith IND 47 Index, our proprietary lists of the top 47 stocks in technical chart and fundamental chart, gained 1.17% today outperforming the major indices.

Among the major news, Cupid was in limelight as the stock surged a 5.76% intraday high, after the company received a new order from United Nation Population Fund (UNFPA) to supply female condoms for the first time to Malawi, Africa worth INR 1.36 crore.

The distribution day count, for the Sensex and the Nifty, remains at 2.0 each, while the Indian market is at  Confirmed Uptrend.