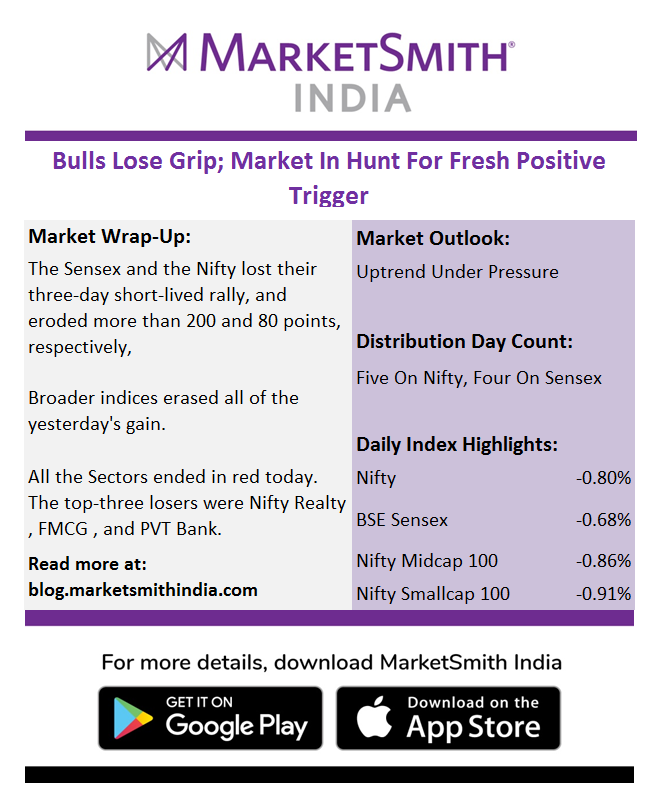 The Sensex and the Nifty lost its three day short lived rally and eroded over 200 and 80 points respectively in today’s trading session. Nifty gained as well as dropped one distribution day today.

After rallying for almost 1000 points in three days, Sensex as well as the Nifty witnessed some sell off today. The market seems to have factored a BJP win in Gujrat election and lack of fresh positive trigger dragged down the key indices today.

Broader indices erased all of the yesterday’s gain as Nifty Midcap and Smallcap indices both lost 0.86% and 0.91% today.

The market breadth, which indicates the overall health of the market was also in favour of losers today. On the NSE, 476 stocks advanced and 1069 stocks declined. A total of 45 stocks remains unchanged.

The MarketSmith IND 47 Index, our proprietary lists of the top 47 stocks in technical chart and fundamental chart, lost 0.90% today.

In stock talk, JK Cement is planning to add up to 8 million tonnes per annum (MTPA) capacity in the next five years taking the total capacity to around 18 MTPA for grey cements. The JK organisation group firm would also invest around INR 1,200-1,500 crore in brownfield expansion at its Mangrol facility in Rajasthan in the next 24-30 months.