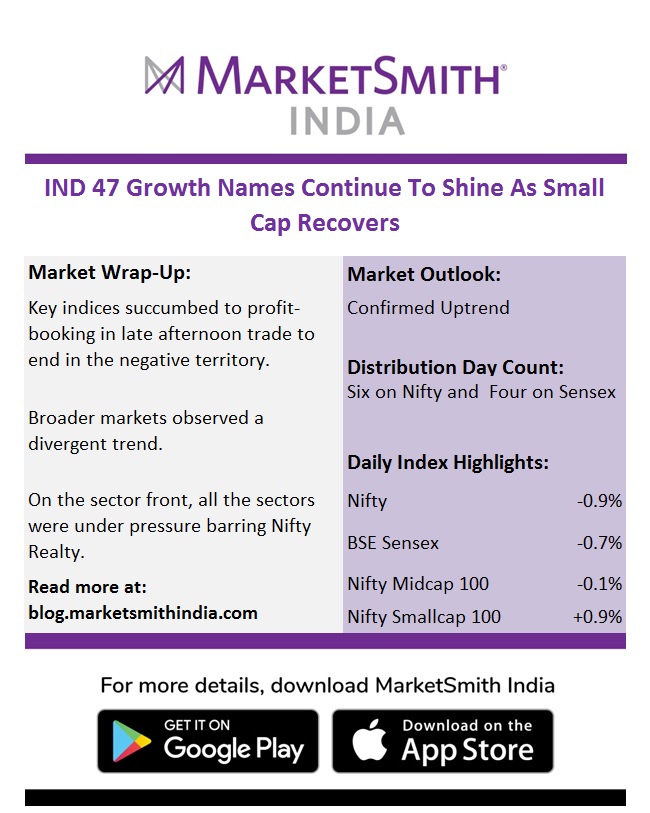 Benchmark indices experienced a lackadaisical action on Monday as the major averages spent much of the day lingering near the unchanged line. However, key indices succumbed to profit-booking in late afternoon trade to end in the negative territory.

Broader markets observed a divergent trend as the Nifty midcap ended with a loss of 0.11%, while the Nifty small cap pocketed a gain of 0.94%.

On the sector front, all the sectors were under pressure and ended the day on a lower note barring Nifty Realty (+0.23%). Auto, Financials, and Banks were the most beaten down stocks as the indices lost 0.99%, 0.97%, and 0.87%, respectively.

The market breadth, which indicates the overall health of the market, was also in favour of gainers today. On the NSE, 838 stocks advanced and 751 stocks declined. A total of 47 stocks remained unchanged.

On the contrary, the MarketSmith India IND 47 list outperformed, rising 0.23% as 24 names in the index of leading growth stocks ended in positive territory. Among all the names, Orient Paper surged the most as the stock galloped 8.98% on higher volume.

On a positive note, today’s trading volume at the bourses came in slightly lower than its previous trading session. The distribution count remains unchanged at six on the Nifty and four on the Sensex. However, the Indian market remains in a Confirmed Uptrend as the benchmark indices are constructively trading above their 50 and 200 DMAs.