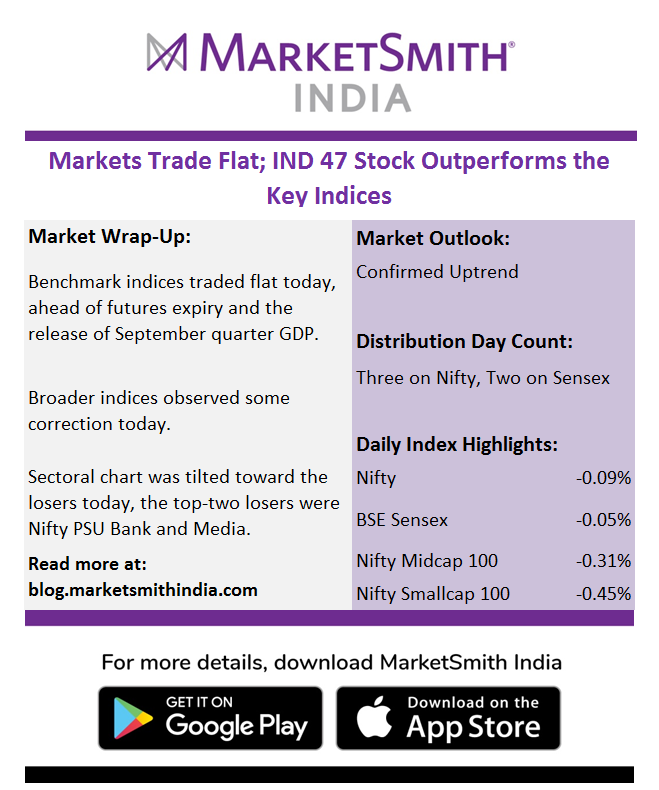 Markets remained flat, amidst negative triggers from Korean Peninsula; investors remain watchful of the September Quarter GDP data yet to be released tomorrow.

Broader indices observed some correction today, as both the Nifty Midcap and the Small cap indices lost 0.31% and 0.45%, respectively.

The market breadth, which indicates the overall health of the market was in favor of losers today. On the NSE, 674 stocks advanced and 814  stocks declined. A total of 45 stocks remains unchanged.

The MarketSmith IND 47 Index, our proprietary lists of the top 47 stocks in technical chart and fundamental chart, gained 0.16% today outperforming the major indices.

In Stock news, NTPC has floated a tender to acquire commissioned-stressed, coal-based power plants in the country. According to the tender document, the Company will shortlist the suitable operational domestic coal-based power assets in India, after evaluating the offered projects.

Both the indices observed a lower trading volume today. The total distribution day count remains at three on the Nifty and two on the Sensex, while the Indian market remains in Confirmed Uptrend.