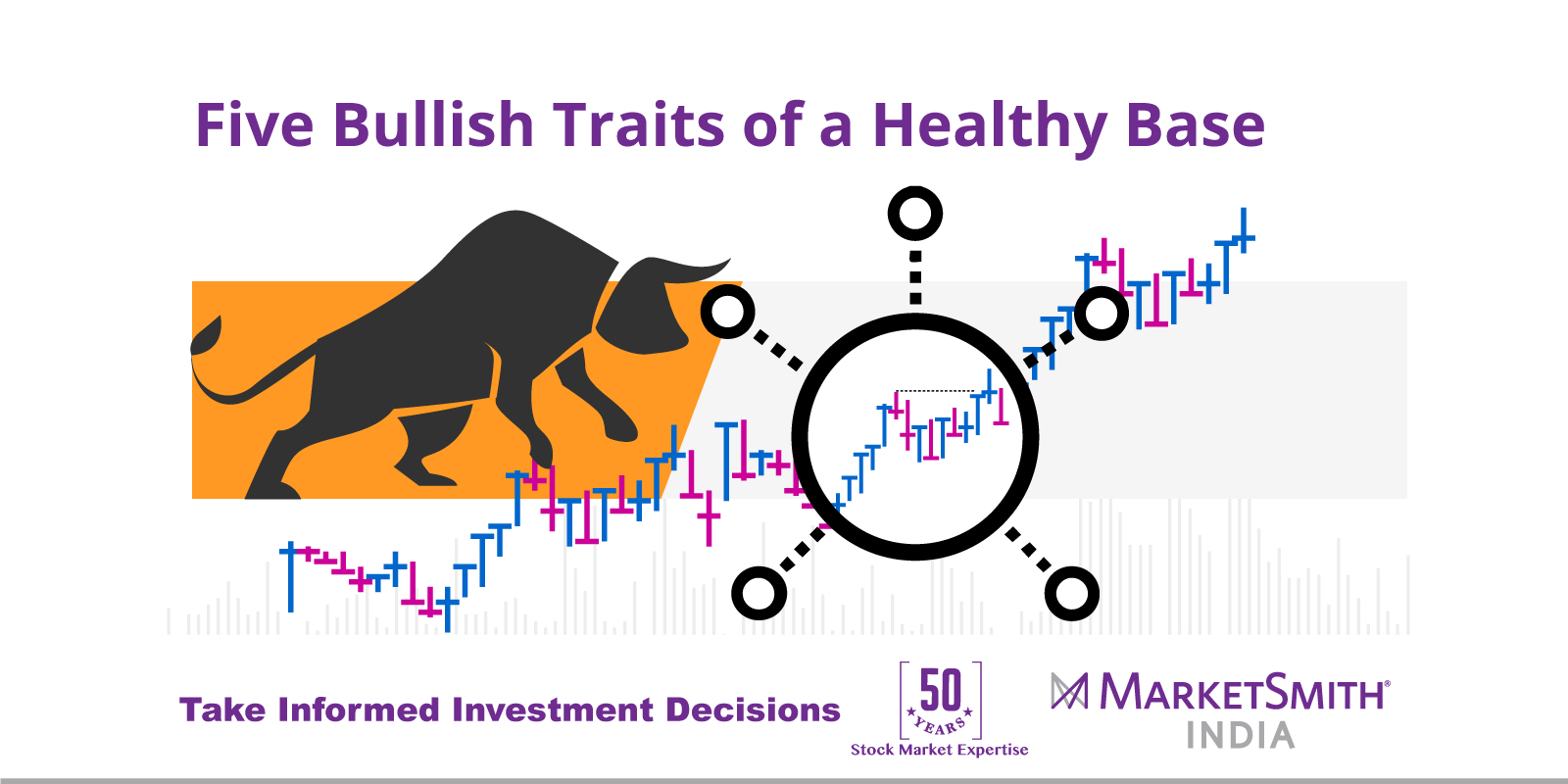 This year has been a sloppy one for midcap and smallcap stocks. While India’s key composites have corrected 4-5% from their all-time highs, the Nifty Midcap and Smallcap indices have seen massive cuts of 15-20%. Some leading stocks of 2017 have tumbled more than 20% from their highs.

To say the least, it has been a challenging period to find stock breakouts working for you. Such episodes of market uncertainty often result in uneven performance. That said, we think the correction in the midcap and smallcap space should serve well in the coming future.

After a strong run-up, a stock will pause and consolidate gains. This is the basing process where a true market leader catches its breath in preparation for another big move up. Recognize the below five signs of a healthy base: the healthier it is, the better chance it has of delivering an explosive breakout.

One: Look for a calm action when the stock starts to pull back. A quiet, orderly decline is preferable to a herky-jerky, wide-and-loose price action.

A cup-shaped base generally shouldn’t show a correction of more than 30-33% from high to low. A flat base shouldn’t correct more than 15% – many show tight, sideways action in a much lighter pullback than that. The bottom line is that you will see calm pullbacks and volatile ones; focus on the former.

Two: Using a weekly chart, spot tight weekly closes at the bottom of the base. Such price stability tells you the pullback may be ending, paving the way for a new round of buying demand. As the stock starts working its way higher toward a prior high, look for signs of heavy accumulation or institutional buying. Big investors have a hard time covering their tracks because big volume always gives them away.

Three: When assessing the quality of a base, especially a cup-with-handle, look at the daily as well as the weekly chart and also the entire base. Do up-weeks in heavy volume outnumber down-weeks in heavy volume? If so, the stock is generally showing signs of net accumulation. You want the big funds buying shares heavily ahead of a powerful breakout.

Four: A healthy Relative Strength line is another attribute of a sound base. Make sure it’s at or near a new high as the stock gets into position for a breakout try. A bullish RS line, shown in blue on the MarketSmith India charts, shows you the stock has been outperforming the market and could have the potential to be a big market leader.

During October 2016 – February 2017, one of India’s fast growing diversified financial services companies, Edelweiss Financial, built a cup-with-handle base pattern. The base depth of 36% (1) was marginally higher than the ideal 30-33%. However, it could be attributed to the steep correction in the market in November 2016 following the demonetization drive.

The stock witnessed heavy accumulation as it worked its way through a 17-week consolidation. The up-weeks came on high volume whereas the down-weeks were on below-average volume (2).

It gave a strong breakout on February 22, 2017, with volume coming in more than 2x the 50-day average volume (3). Its Relative Strength line also scaled an all-time, indicating market leadership (4). The stock went on to multiply almost 2.5x in the next eight months, driven by consistent double-digit earnings growth, a strong rally in NBFC stocks, solid institutional demand and strength in the overall market. 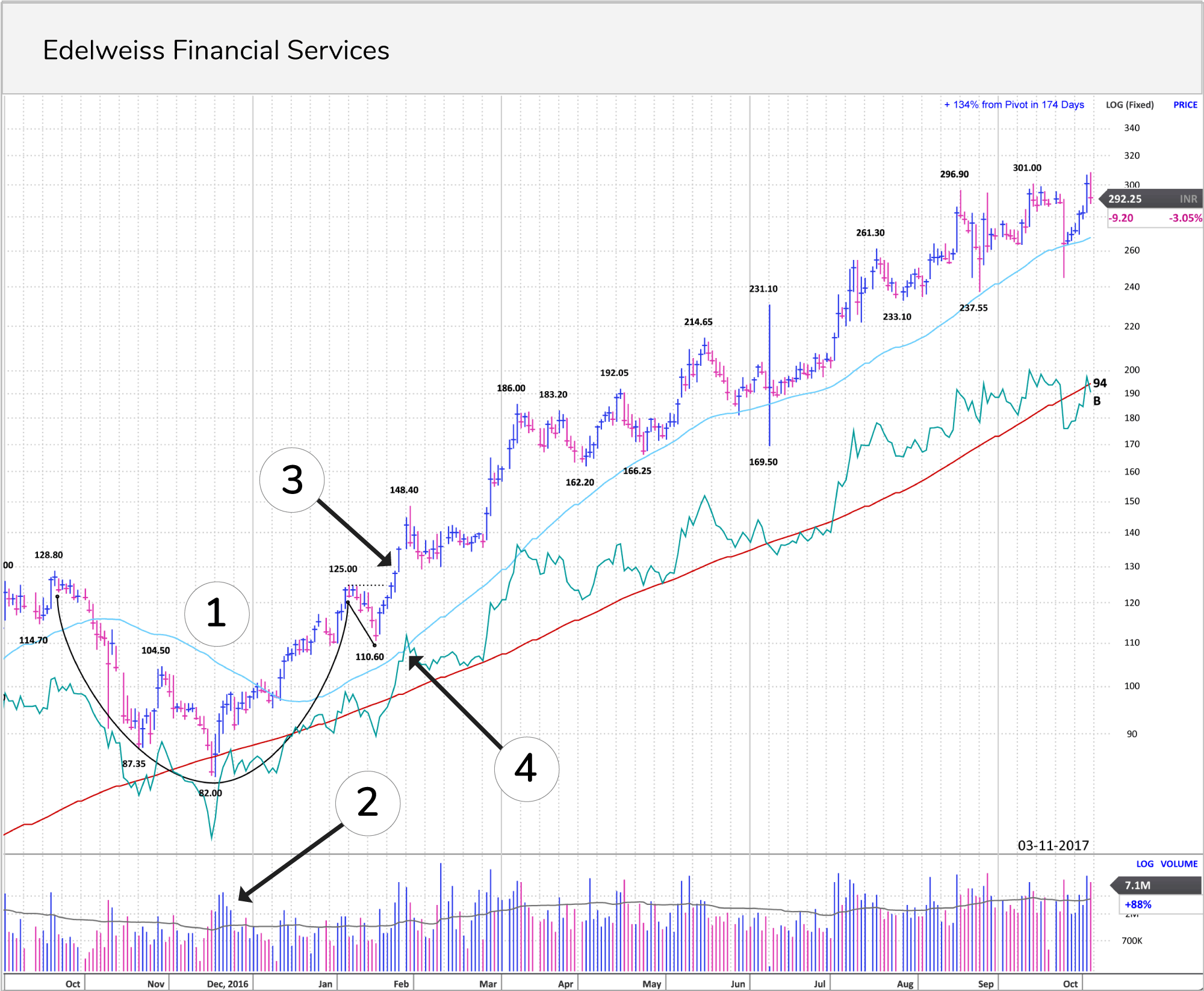