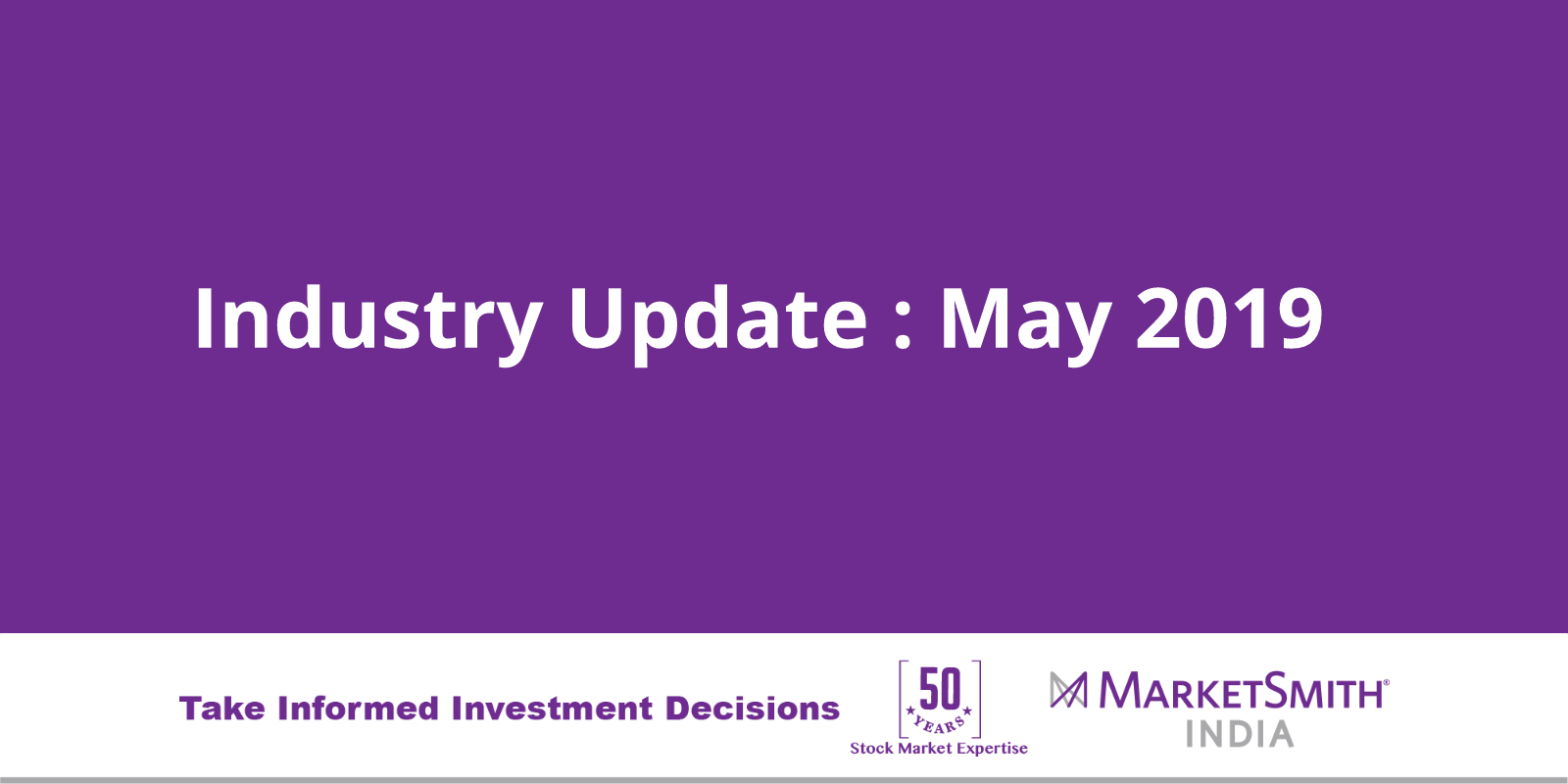 Basic Materials: Nifty Metal was down ~10% in the first half of the month, but gained strength in the later half. The index is presently in a Confirmed Uptrend and is trading below its 50-and-200 DMA.

Capital Equipment: Capital equipment stocks in India gained 3% in May. The leading sub-sectors were Bldg-Constr, Prds/Misc, and Bldg-Heavy Construction.

Consumer: The Indian counterparts fared much better with Nifty Consumption up 3.03% in May whereas FMCG gained 1.78% in the same period. It is trading just above its 50-and 200-DMA.

Healthcare: Nifty Pharma is currently in a Rally Attempt. The index fell more than 10% in May, and is trading 7–8% below its key moving averages. The Indian Pharmaceutical market grew 10.4% in April.

Technology: Nifty IT remains Under Pressure with an elevated distribution day count of 4. The index lost 3.2% MTD. It is trading above the 50-and-200-DMA.

Telecom: The S&P BSE Telecom Index gained 2.5% m/m in May, as compared with 1.2% gains in Sensex. It is trading below key moving averages.

US S&P Metals & Mining Select Industry Index was down almost 14% in May, mostly due to general weakness in global markets amid trade war concerns.

Nifty Metal was down ~10% in the first half of the month, but gained strength in the later half due to strong Indian market amid results of general elections. The index is presently in a Confirmed Uptrend. It is trading below the 50-and-200 DMA.

After the results of general elections, the construction and infrastructure sectors seem promising, which will boost cement, paints, and steel companies.

Capital Equipment stocks started the month on a solid note globally, boosted by a positive earnings season. However, in the second half, most stocks witnessed a trend reversal, weighed down by revived U.S.-China trade war and global growth concerns. While most global markets were impacted by these factors, the Indian capital equipment universe was largely resilient.

Capital Equipment and related stocks in India gained 3% in the month. They have displayed strong momentum ahead of the Lok Sabha election results. As expected, companies engaged in construction and real estate development outperformed other sub-sectors spurred by optimism on increased infrastructure investment by the government. The leading sub-sectors were Bldg-Constr Prds/Misc and Bldg-Heavy Construction.

In June, we expect the sector to consolidate globally from current levels due to the lack of catalysts. Meanwhile, in India, we see continued positive trend in the sector.

The Indian counterparts fared much better with Nifty Consumption up 3.03% in May whereas FMCG gained 1.78% in the same period. Nifty 50 gained 3.2% in May. Consumption stocks are gaining momentum lately, especially after the election results on May 23. Increased certainty after elections, increased consumer confidence due to stable inflation, and a possible policy rate cut by the RBI will likely drive the sector.

Aditya Birla Fashion & Retail reported on May 15. The results were a miss on both revenue and EBITDA.

Britannia reported Q4 FY19 revenue and profits on May 2, in line with BB consensus.

Increased certainty after elections, increased consumer confidence due to stable inflation, and a possible policy rate cut by the RBI will likely drive the sector.

Nifty Energy is in an Uptrend Under Pressure. The index lost its momentum during the first half of May. However toward the end of the month, especially in the last few sessions, it started gaining strength.

Crude has been picking up from the start of the year and has rallied almost 40% YTD. This was mainly driven by the deal between OPEC and other major oil-producing countries such as Russia. But, due to trade war tensions, crude corrected ~10% in May.

Overall, the outlook of oil, does not seem very healthy in the long run and for 2019, it is expected to remain range bound due to weaker than expected global economic growth. Excess production from the U.S. will also be weighing on the oil process, pulling it downwards.

Nifty Pharma index is currently in a Rally Attempt. The index fell more than 10% in May and is trading 7-8% below its key moving averages. The Indian Pharma market grew 10.4% in April, higher than 9% growth in March. The Indian companies registered 10.9% growth, compared with MNCs at 8.6% in April.

Facebook removed 2.2B fake accounts in Q1. This number is a bit lesser than the 2.4B Monthly Active Users. Google will start featuring ads on the home page of its mobile app later this year. Twitter is experimenting with more ads for selective users. It is trying to increase the monetizable Daily Active Users with various initiatives. Last year, the company deleted 6% of twitter accounts in order to fight fake accounts.

Zee entertainment will remain volatile as the stock price movement has become sensitive to the news on strategic sale of stakes. We recommend investors to continue to hold stocks which have sound technical and fundamental ratings.

The U.S. retail sector index declined 6.52% in May, in line with the S&P 500 index, which also fell 6.58% during the month due to worries surrounding the escalating trade tensions and global economy slowdown. On YTD basis, retail sector index has increased 10.81% as compared with 9.78% gain in the S&P 500 index. Many companies have taken a hit due to increased tariff on Chinese imports and adjusted their full-year guidance incorporating these tariffs. The U.S. retail sales dropped 0.2% in April, following 1.7% growth in March. It was below consensus of +0.2% growth. Six of 13 major retail categories showed m/m decrease. The U.S. inflation rate also rose 0.3% in April.

After making new highs in April, the Semiconductor Index (0SOX) has declined ~16% this month, breaching 200-DMA. The North American Software Index (IGV) was down 7% this month and has now dropped below its 50-DMA. We see its next support at the 100-DMA level.

The NIFTY IT index remains in an Uptrend Under Pressure with an elevated D-day count of four. The index lost 3.2% MTD. During the start of the month, it witnessed sharp selling amid trade war concerns but recovered towards the end with the exit poll and solid final election results.

Positive developments on the U.S.-China trade deal could reduce the volatility and further improve market conditions. In mid June, the Electronic Entertainment Expo (E3) will be one of the most watched events given the number of announcements expected by leading gaming companies, including Microsoft.

The Federal Communications Commission (FCC) is in favor of the Sprint and T-Mobile merger. But the deal is opposed by the antitrust division of the Justice Department. The $26B proposed merger of the third and fourth largest telecom companies is based on the argument that the merged company will be better positioned to help the U.S. lead over China in 5G technology.

Despite losing market share to Reliance Jio, Bharti Airtel has been able to maintain steady revenue and is currently improving its margin. Meanwhile, Vodafone Idea has seen continued decline of its revenue. The competitive pressure from Reliance Jio will continue to affect both the companies in the near-term as they try to reduce debt and improve ARPU.