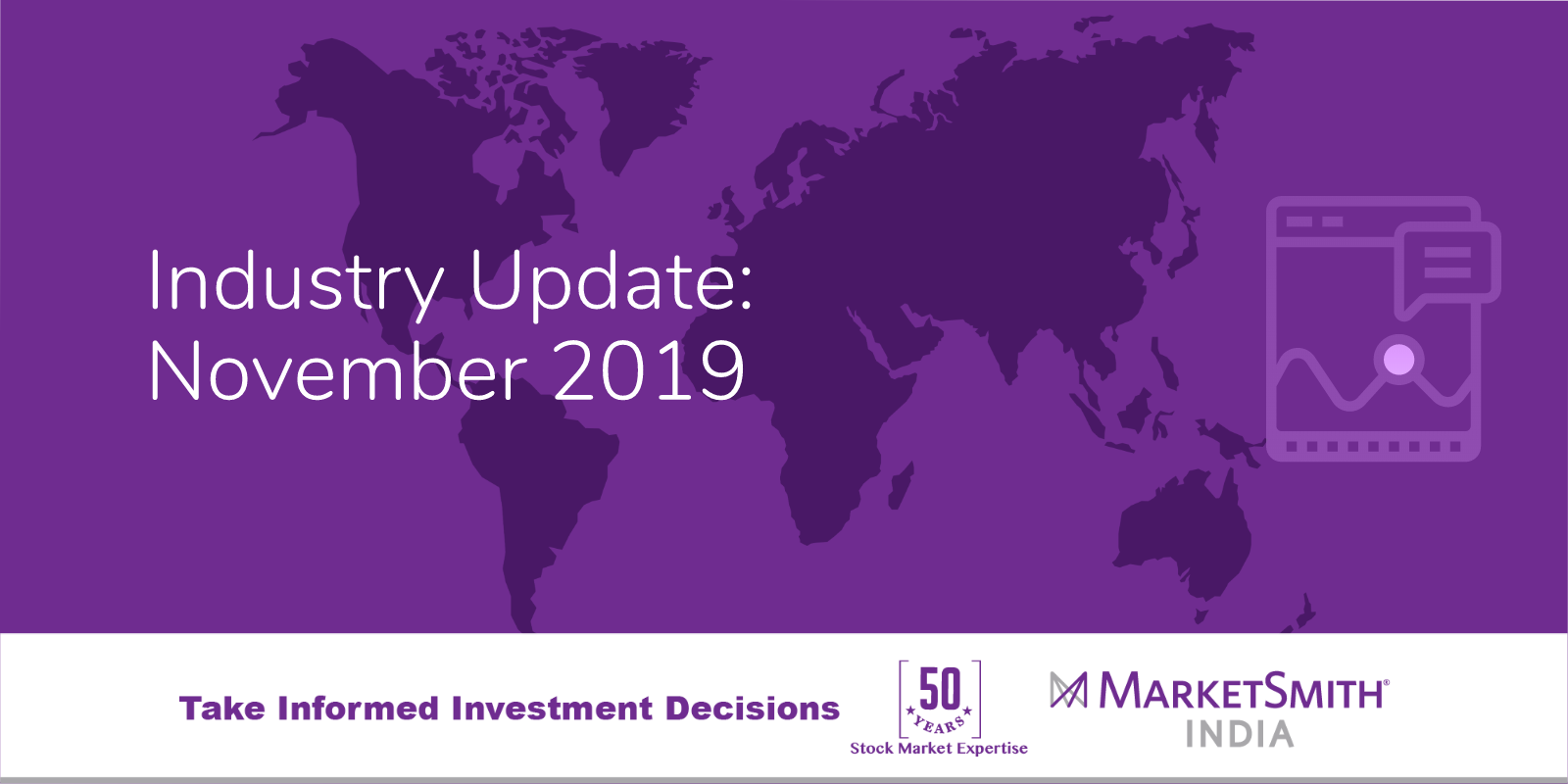 In November, Nifty consolidated gains and was trapped between 10,800 and 12,000 for most part of the month. The gap between Nifty and its rising 21-DMA shrank as a result of the consolidation during the month. At the start of November, Nifty was extended 3.5% and 6.0% from its 21- and 50-DMA, respectively. Currently, Nifty is trading less than 1% and 3% above its 21- and 50-DMA, respectively. The market remained in a Confirmed Uptrend and the distribution day count remained low during the month, with the addition of two distribution days in the last week of November. The distribution day count is now at four. FIIs/FPIs were net buyers in November (Rs 13,000 crore), while net selling from DIIs was Rs 8,000 crore.

We will have an interest rate decision next week (December 5). Over the last 11 months, the central bank has been on a rate-cutting spree, reducing the rate from 6.5% to 5.15%, a cut of 135bps. Q2 FY20 GDP came in at 4.5%, in line with consensus. Retail inflation is now at a 16-month high of 4.62%, which is well above the RBI’s target rate of 4%. Against the backdrop of slowing economic growth and upward trending CPI, it will be crucial to watch how MPC will strike a balance.

Looking forward, even as we maintain a positive view of the general market, we are taking note of the higher number of distribution days. Nifty is less than half a percent above its 21-DMA. If the 21-DMA is breached and the distribution day count remains elevated, we may downgrade the market status to an Uptrend Under Pressure.

Automobile: Nifty Auto is in a Confirmed Uptrend and is currently 3% above its 50-DMA and 2% above its 200-DMA.

Banking and Finance: Nifty Bank rallied ~6% m/m in November. The index is currently in a Confirmed Uptrend. The index continues to trade above its key support levels.

Basic Materials: Nifty Metal is presently in an Uptrend Under Pressure. The index remained a bit volatile throughout the month and is trading 6% above 50-DMA and 3.5% below 200-DMA.

Capital Equipment: Indian capital equipment stocks were subdued in November as the sector declined 3.2% on average.

Consumer: In India, Nifty FMCG did not fare well and was down 4.5% over the month. The index breached its 50-DMA and is trading just below it.

Energy: Oil production from the 14-member Organization of the Petroleum Exporting Countries was down in November on a m/m basis. Brent crude oil price increased $2.57/bbl in November.

Healthcare: Nifty Pharma gained ~4% in November, regaining its 50-DMA and is now testing the resistance at its 200-DMA. The index remains in a Confirmed Uptrend.

Media and Internet: Nifty Media was up 2.7% in November, compared with the Nifty’s gain of 1.5%. It is trading below all its key moving averages.

Retail: The U.S. retail sector index gained 1.7% in November and continued trading along its 50-DMA, while the S&P 500 index gained 3.4% during the month.

Technology: Nifty IT is in a Rally Attempt and is currently trading below its key moving averages. The index lost 1.26% in November.

The Nifty  Auto Index is in a Confirmed Uptrend and is currently 3% above its 50-DMA and 2% above its 200-DMA. The index underperformed the market as it lost 4.3%, compared with the market’s gain of 1.5% in November.

Consensus estimates that the implementation of BSVI norms from April 2020 will lead to a 10–15% increase in cost of manufacturing, thus exerting pressure on margins.

Nifty Bank rallied ~6% m/m in November. The index is currently in a Confirmed Uptrend. The index continues to trade above its key support levels.

Given the weak GDP for Q2 FY20, we expect the sector to remain under pressure. The next few sessions will be volatile as the RBI is set to present its monetary policy (street estimates a cut of 25bps) on December 5, which will coincide with the expiry of the derivative session.

U.S. S&P Metals & Mining Select gained strength in November, continuing the trend from October. The index gained almost 5% in November, following a 3% rise in October, due to the strength in the overall sector performance.

Nifty Metal is presently in an Uptrend Under Pressure. The index remained bit volatile throughout the month and is trading 6% above its 50-DMA and 3.5% below its 200-DMA.

Trade war tensions have started building up again toward the end of November. In the face of uncertainty in the ongoing trade negotiations, prices of safe-haven metals like gold and silver may remain volatile. Base metals too are expected to lose strength due to weak economic data from various emerging economies, including India.

The global capital equipment universe underperformed broader market peers, but showed improvement in the short term. Within the sector, positive momentum was led by cyclical sub-sectors like industrial equipment and heavy machinery. Sectors like aerospace/defense and building construction materials dragged the market performance.

Indian capital equipment stocks were subdued in November as the sector declined 3.2% on average. While all the sub-sectors closed in the red, industry weakness was mainly driven by household appliances, and building construction and material stocks which declined 5.2% and 2.4% on average, respectively.

In December, we expect the sector to remain flat to marginally positive due to lack of new catalysts and slowing economic growth.

The S&P Consumer Discretionary index moved sideways and closed marginally in the green underperforming the S&P 500 by about 300bps.

In India, Nifty FMCG did not fare well and was down 4.5% in the month. The index breached its 50-DMA and trading just below it.

We expect another challenging quarter for the sector, owing to a lack of demand and liquidity crunch. The recent corporate tax cuts might allow companies to introduce price cuts to boost demand or give better trading margins to distributors to capture market share.

Nifty Energy is in a Confirmed Uptrend and trading 2.5% and 4% above its 50- and 200-DMA, respectively. The index was down 1.54% in November, consolidating strong gains of more than 6% in October.

Oil production from the 14-member Organization of the Petroleum Exporting Countries was down in November on a m/m basis. Brent crude oil price increased $2.57/bbl in November.

OPEC meeting will take place in early December and the street is expecting further production cuts. This may give a boost to oil in the short term. However, the outlook of oil in the long run does not seem very healthy.

Nifty Pharma gained ~4% in November, regaining its 50-DMA and is now testing the resistance at the 200-DMA. The index remains in a Confirmed Uptrend. In October, Indian Pharmaceutical market growth declined to 5.1%, below 11.9% growth in September. The volume also slipped 2.7% in October, compared with 1.5% volume growth in the last 12 months.

During September, ishares US Healthcare (IYH) was up more than ~5%, outperforming S&P 500 gain of more than ~3%. Healthcare performance over the last month has improved and the ETF is breaking out of a year-long consolidation into all-time high.

We still recommend patient and selective approach toward the sector, and focus on companies with good growth outlook. Over the last few weeks, Medical services, hospitals, and diversified multinational companies are outperforming in the healthcare space.

Nifty Media was up 2.7% in November, as compared with a 1.5% gain in the Nifty. It is trading below all its key moving averages.

Subdued growth in consumption will continue to affect advertising revenue of media companies this fiscal year.

With the promotional offers and festival sale in Q3 FY20, there could be an uptick in the top-line of retail firms. However, margins may remain soft.

Global View – IGV is breaking out of a Base

The North American Software Index (IGV) was up 8% this month followed by 1.43% gain in October. IGV broke out of a 17-week cup base with support at its 10-DMA.

Nifty IT is in a Rally Attempt and is currently trading below its key moving averages. The index lost 1.26% in November.

Nifty IT is currently finding resistance at its 200-DMA. We expect the index to consolidate for a while before retaking its 200-DMA.

The government’s decision on dues from Vodafone Idea will largely decide the company’s ability to fund its daily operations. Last month, the Supreme Court had it given a three-month deadline to pay up their dues.