Simple sell rules can save your day

Vishal Sikka’s shocking exit from the position of CEO and MD of Infosys dealt a severe blow to the Company’s market value. Following the news, Infosys’ shares dropped 14.4% over two trading sessions, wiping off almost INR 34,000 crore from investors’ wealth.

Before Sikka took over the charge in 2014, Infosys was reeling under pressure due to poor growth and high attrition. Market participants were expecting Sikka to turn things around at Infosys and he was successful to a large extent.

Infosys’ revenues and earnings grew at 23% and 16% y/y, respectively, in Q4 FY 2016, the fastest pace in two years. Further, the stock broke into new highs in April 2016 after a long period of consolidation.

At MarketSmith India, we added Infosys to our model portfolio after we saw signs of new leadership benefitting the Company. We expected Infosys to do well on the back of increased focus on automation and other high-margin digital services under Vishal Sikka.

However, the stock did not meet our expectations over the next two months. With Brexit turning into a reality, global stock markets became highly volatile. In the run-up to the U.K. referendum, Infosys was finding it hard to trade above its 50-day moving average. With an unprecedented event like Brexit jolting stock markets, we scanned our portfolio for laggards. Infosys caught our eye and we decided to remove it at a loss of 3.6% in late June 2016.

Looking at where Infosys is today, our exit based on technical analysis seems to have done well. The stock has corrected 28% since our removal on June 24, 2016.

This was much before the Company’s sales and earnings growth slowed down to single digits and internal conflicts came out in public domain. Had we waited for all this to play out, we would have been very late with our removal.

There are three kinds of risks that any multi-national organization faces: global risk, industry-specific risk, and company-specific risk. Unfortunately, Infosys is plagued by all three currently.

Weak demand and the appreciation of Indian Rupee against the U.S. Dollar pose significant headwinds. The IT services industry has seen a structural shift towards innovative technologies, such as artificial intelligence, cloud, digital services, and software as a service (SaaS). However, the Indian IT services companies have been slow to adopt these trends and are struggling to generate revenue growth.

Further, growing protectionism in the U.S. is putting pressure on the USD 140 billion Indian IT industry. Following a crackdown on H-1B visas by the Trump administration, Infosys plans to hire 10,000 U.S. workers in the next two years. The Company’s operating margin would be negatively impacted due to the increase in onsite costs. Infosys has a long way to turn around its business, as it still has a high exposure to legacy app services (about 80% of revenue), which are under the threat from cloud-based SaaS services.

Internal conflicts add to the misery

From the beginning of this year, Narayana Murthy and fellow founders have expressed unhappiness over the manner in which Infosys has been run over the past three years, calling for a change in the Board’s composition several times. On June 9, 2017, they even considered a sale of their entire 12.75% stake in the Company.

They have raised questions related to the Panaya acquisition and the huge severance packages paid to some outgoing executives. These issues have not been resolved despite a series of investigations carried out, in which no clear evidence emerged against any Infosys employee.

Vishal Sikka mentioned these continuous distractions and disruptions, among his reasons for leaving, as factors that prevented management to accelerate the Company’s transformation.

Retail investors end up on losing side 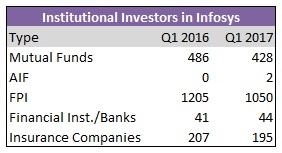 When Infosys was being dumped by mutual funds, small investors increased their stakes. This could be attributed to the popular concept of averaging down, which seldom works, especially with out of favour stocks. Similar examples can be noticed in other beaten down names such as Sun Pharma and Lupin.

Lessons to be learnt

While only time will tell if Sikka timed his exit well, we are glad that we got out of Infosys much earlier.

There is no doubt that fundamental analysis should dominate your stock screening process. However, incorporating a bit of technical analysis into your investment strategy will help you in keeping an eye on where the smart money is moving. Further, it will aid you in getting out of market laggards much before a bad news comes in. In such cases, price-volume action serves as an important leading indicator.

Infosys is just one example we talked about in detail. There are many success stories of yesteryears that have gone down the drain. With the help of time-tested sell rules in place, investors would not only be able to avoid severe losses but also the mental stress caused by holding on to losers.

Watch this video to learn more about when to sell stocks.

To know more about our investment strategy, CAN SLIM, click here.

5 Replies to “Infosys: Why Timing Your Exit is Crucial?”