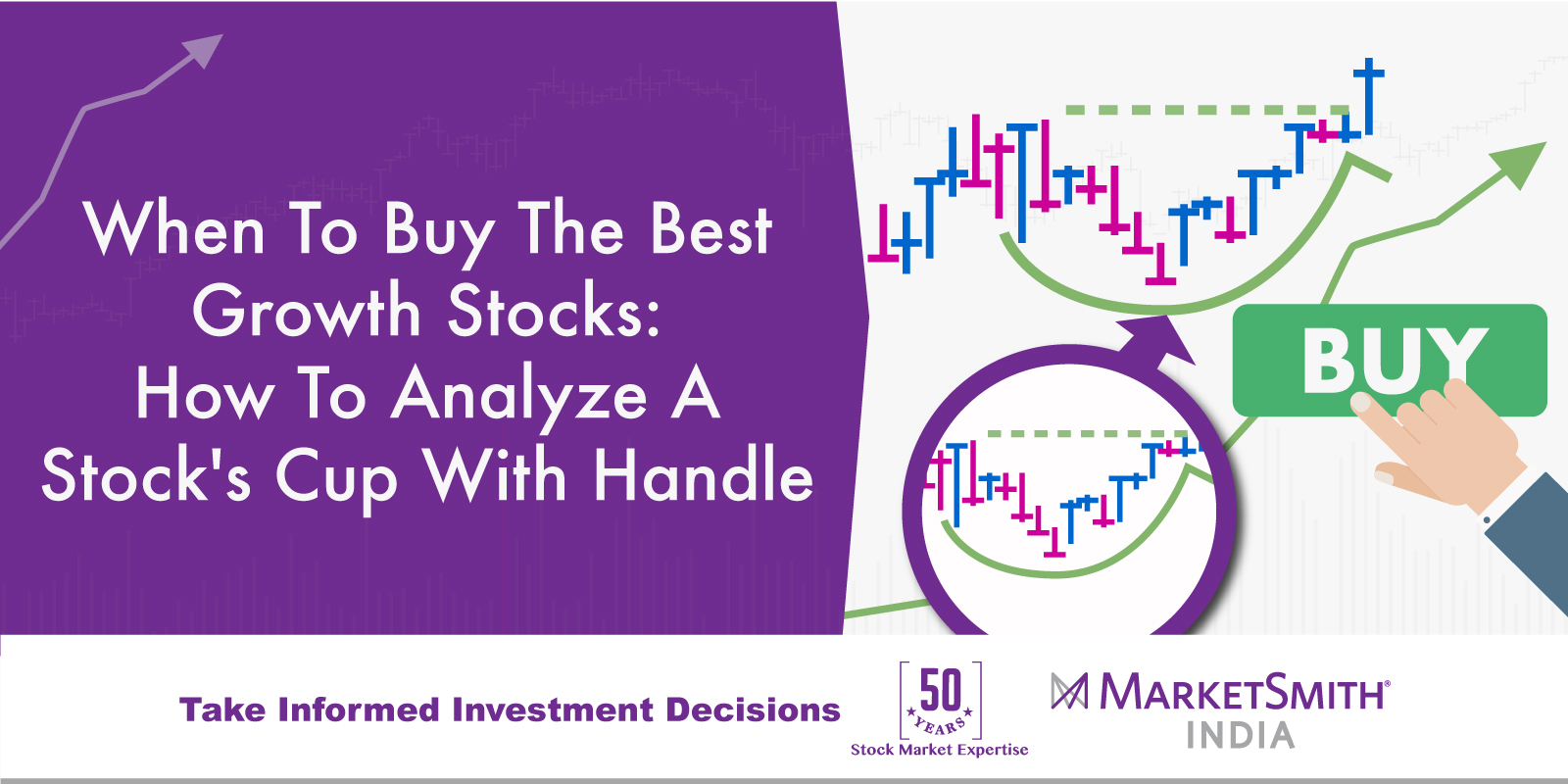 Among the eight principal base patterns — including the ascending base, base on base, double bottom, flat base, high, tight flag, IPO base, and  saucer — cup-with-handle remains to this day one of the most successful.

Why? Simple. Over the centuries, human nature hasn’t changed. Greed, fear, hope, despair, and other emotions drive stock prices. So do the laws of supply and demand.

This is why sifting through the charts of the market’s greatest winners is time well worth spent. As you’ll see, the general shape of the cup-with-handle and other critical chart patterns appear over and over again. That’s why they give the prepared investor an edge in the stock market.

Basic Characteristics Of The Cup-With-Handle

The stock needs to show a 30% uptrend from any price point, but it must be before the base’s construction. Or, the stock must show a minimum 20% increase from a prior breakout. The cup-with-handle must be at least seven weeks long. If there is no handle, then the cup itself must stretch a minimum six weeks.

The handle alone needs at least five days to form, but it could go on for weeks. Make sure it doesn’t exceed the cup portion in time or the size of decline. A good cup-with-handle should truly look like the silhouette of a nicely formed tea cup. The handle always shows a smaller decline from high to low; it represents a final shakeout of uncommitted holders, sending those shares into sturdier hands in the market. In most cases, the decline from high to low should not exceed 8% to 12%. During bear markets, some good cup-with-handle bases show a large, double-digit decline within the handle. But again, it should not exceed the drop within the cup.

The Handle? It Must Be High Enough

The handle should form in the upper part of the entire pattern. If it’s too low, it’s flawed. One way to check if that handle is proper: use the simple midpoint test. Add the highest price and lowest price within the handle and divide by 2. That number should be greater than the midpoint of the actual base itself.

Try to limit your picks to cups that are no more than 30% or 33% deep, except for those built during a bear market. In that case, an exceptional growth stock can fall 40%, 50%, or more and still make a successful breakout. Still, shallower is better. It shows that the big hands are catching the stock. Look for volume to dry up along the lows of the base. Volume should be light in the handle, too. Tighter price action is better. This is true of almost all bases. A loose, choppy base shows the stock needs to go far for price discovery. If institutions are holding on to the stock, it won’t fall too far.

This, of course, is where all the above parameters lead if they appear correctly. The buy point from a cup-with-handle base appears at the highest point of the handle.

Volume On The Breakout

When the stock is breaking out, you should generally see a rush in turnover. Volume should ideally rise at least 40% above its 50-day average. For small and midcap stocks, expect breakout volume to double or triple. 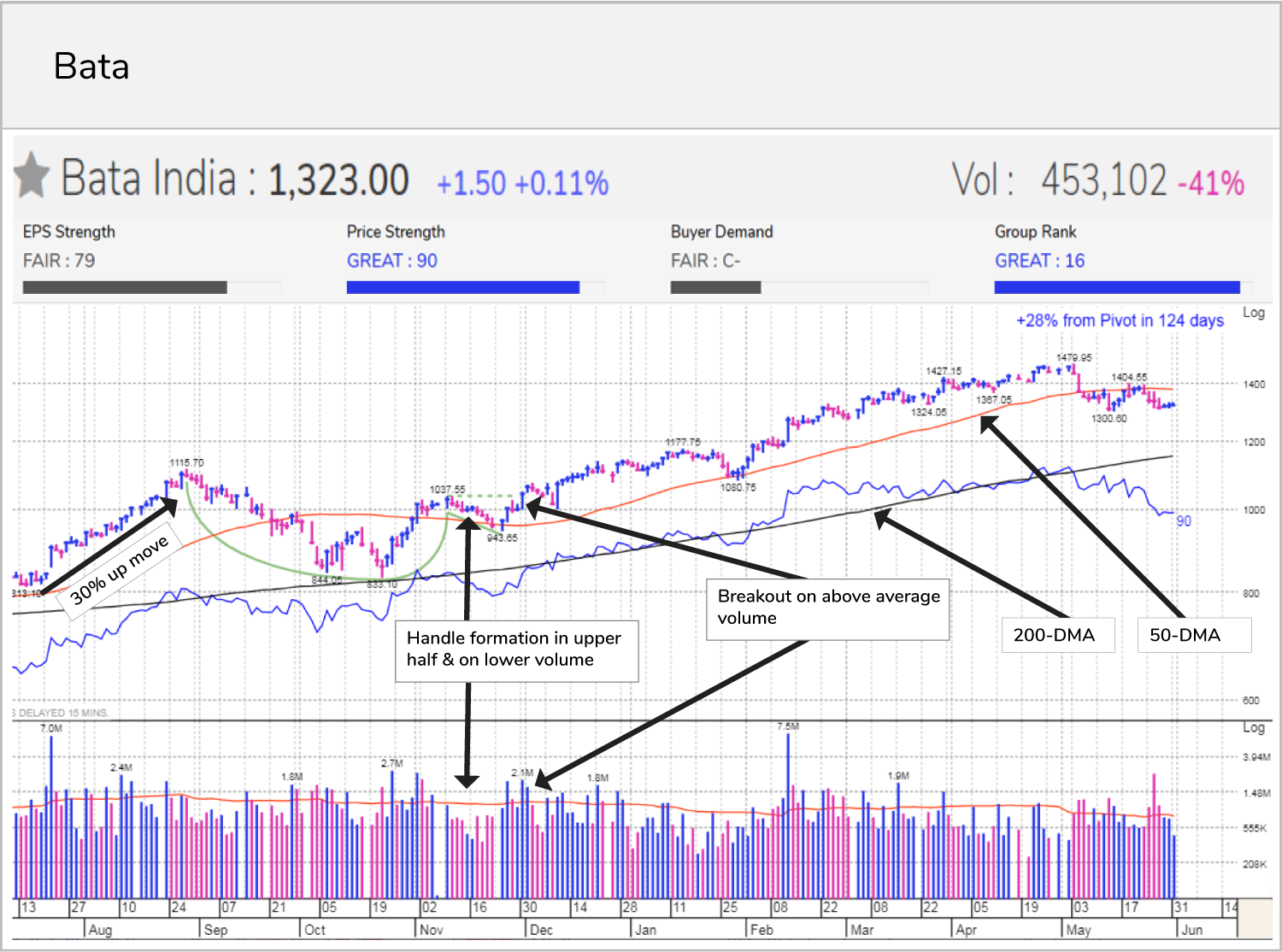