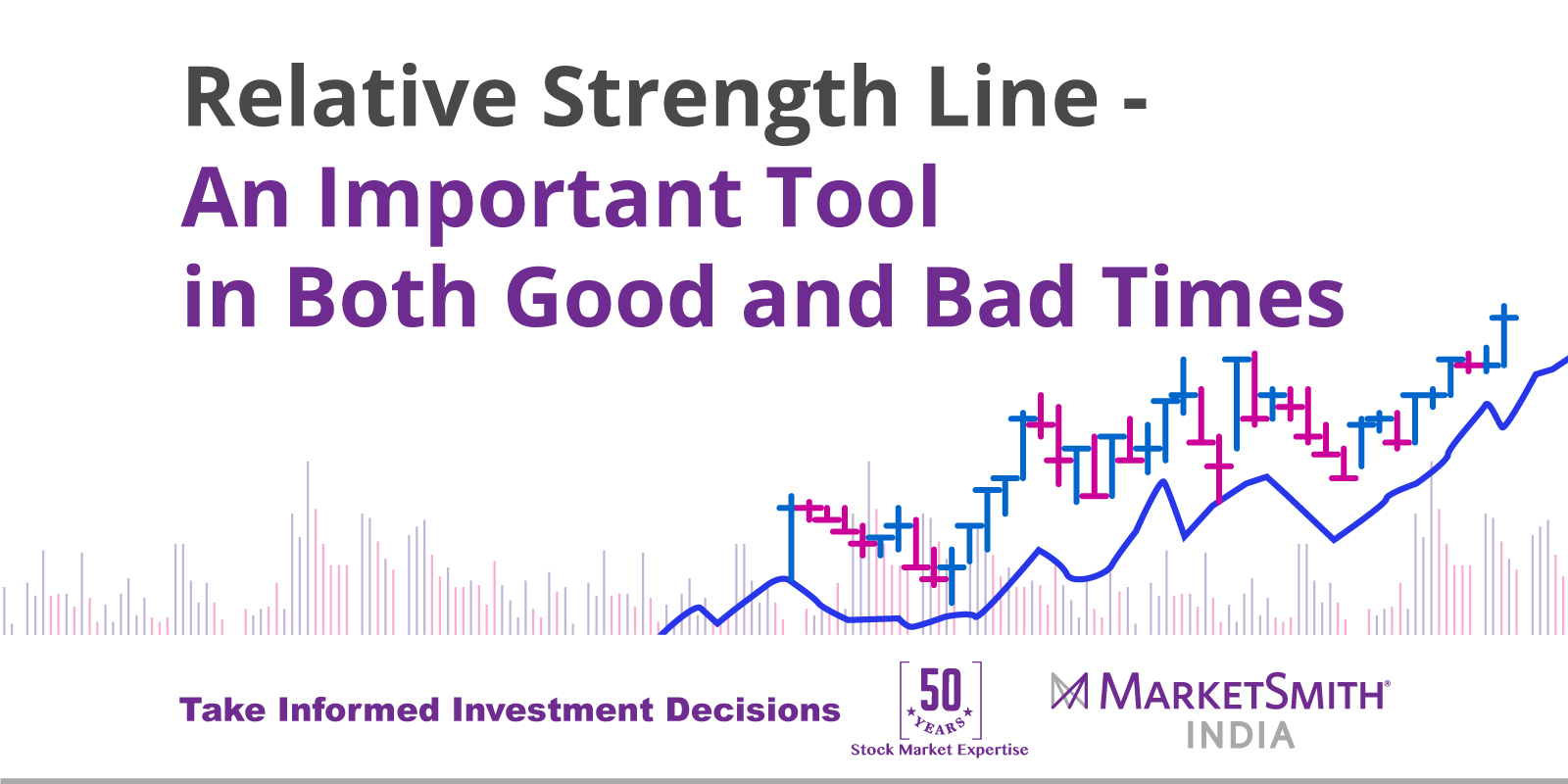 Every demanding craft presents its puzzles. Having a few specialty tools on hand and knowing how to use them can make all the difference in working through such occasional challenges with success.

The RS line compares a stock’s price action to that of the Sensex. A rising line tells you the stock is outperforming the benchmark index. Even if a stock falls in price, if the Sensex falls harder, the stock’s RS line still rises.

A falling RS line says the stock is being passed up. RS lines near highs show a stock that is steadily outpacing the general market. RS lines near lows indicate a stock is struggling, and can’t muster the strength to compete with its peers.

Why Does That Matter?

There are certain junctures in stock charts where a stock’s strength relative to the overall market is telling.

Breakouts: You would like to see a relative strength line moving toward or into new highs as a stock breaks out. Sometimes, such as when a stock makes a big move out of a deep base, the RS line is not actually seizing new highs at the breakout. But the direction — particularly before the breakout — can be an important indicator, corroborating the strength of a stock as you prepare to make an initial buy.

Follow-On Patterns: The RS line is also a good secondary reference when deciding whether and how much to buy as a stock enters buy zones in three-weeks tight or 50-DMArebound situations. A lagging RS line counsels a more cautious approach.

Later-Stage Breakouts and Rallies: After a lengthy rally a stock may send some topping signals, or cut its 50-day line in heavy trade. These can be signals to begin trimming your position and lock in profits. How does the RS line look? Relative strength will often begin to break down before the actual stock price, or simply fall into a lull below its highs. If it is holding near highs, which shows the stock outperforming or holding its own against the market, you may want to wait for additional signals before trimming too much of your position.

How RS Line Screamed Buy for This Stock

After a massive rally of 64% (during Mar 17-Jan 18), Nifty witnessed some selling pressure since the beginning of February. Persistent selling by foreign investors amid uncovering of PSU bank frauds resulted in rising distribution and the key index breaching its crucial support of the 50-day line. As a result, we moved the Indian market to Uptrend Under Pressure on February 6, 2018.

Owing to weakness in the market, a majority of stocks started getting hammered. However, there was one stock that refused to give in.

It was Venky’s (India), one of India’s leading players in the poultry business along with interests in animal health and refined oil segments.

While the Indian market remained in Under Pressure, Venky’s displayed resilience, as it traded in a tight range. During this period, the stock’s RS line remained close to its all-time high. It began tilting upward as the stock rebounded from its 50-day line and almost touched new highs ahead of a breakout that occurred on February 23, 2018 (1). 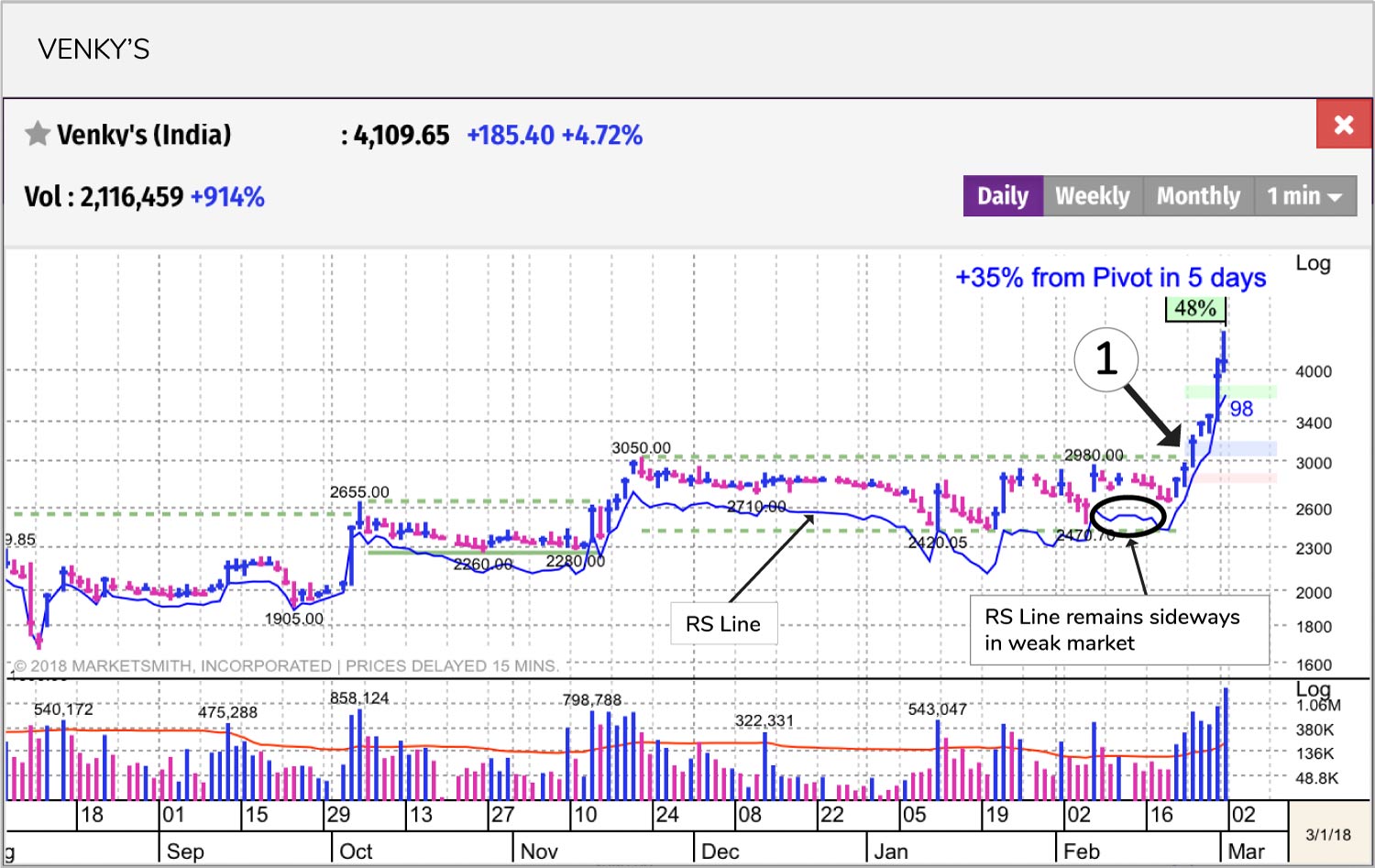 Venky’s RS line gained particular strength over the past seven sessions, as the stock thrashed out new highs, while the overall market struggled for direction. The stock has rallied 35% from its pivot price of Rs. 3050 in just five sessions.

From a model portfolio perspective, the stock met most of the CAN SLIM criteria. However, we took a cautious approach mainly on account of a not-so-favourable market direction. But then, Venky’s had different plans. It was in a hurry and did not wait for the general market trend to improve. Perhaps, strong fundamentals, breakout from a valid base pattern and RS line hitting new highs were more than enough for us to go long on the stock.

As a matter of fact, the Uptrend Under Pressure market condition is not a red signal for new buys. It suggests one should keep buying decisions restricted to stocks with exceptional fundamentals and technical strength.

In hindsight, we could have focused more on Venky’s strengths and worried less about deterioration in market condition. And that’s why they say hindsight is a great teacher. As investors, post-analysis of past trades is a must if one wants to keep improving. Going ahead, we will continue to pay close attention to the market direction, but we will also try to make the best use of an important tool that comes in handy both in good and bad times, the Relative Strength Line.