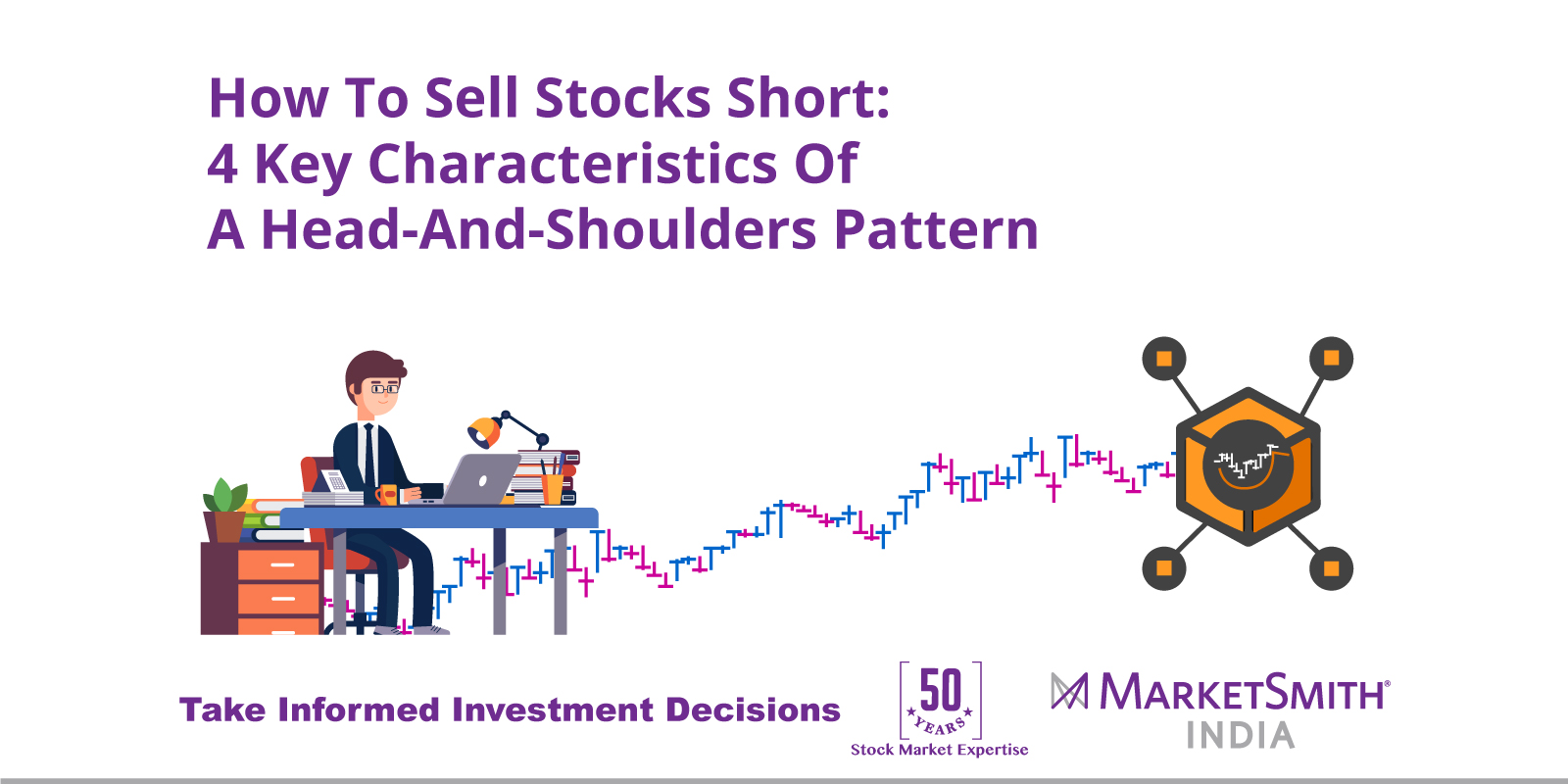 On the long side of investing, you must get comfortable with seven basic chart patterns that big winners trace before they break out to new highs and bold gains.

As you read MarketSmith India learning article, you’ll come across the cup with handle, double bottom and flat base. In time, you’ll also pick up the elements of a saucer, an ascending base, a base on base, and the high, tight flag.

On the short side, you don’t need to know seven patterns. But you must learn how to analyze the head and shoulders. And in time, you can get good enough to glance at a chart and say, without hesitation, “Hey, that looks like a head-and-shoulders pattern forming.”

Yet visual recognition alone is not enough. Know the core criteria of a good head-and-shoulders topping pattern by heart. The more you lock these into memory, the more quickly you will process chart information and make the right trading decisions.

A good head-and-shoulders pattern has these characteristics:

1.A sharp rally to new highs, followed by a fast drop below the 10-week moving average.

2.At least two or three attempts by the stock to rally back above or near the 10-week line, feeling upside resistance each time.

3.The completion of a left shoulder, head and right shoulder in five to seven months, in most cases.

4.The right shoulder tends to form at lower prices than the left shoulder.

Once these conditions have been met, then look for an entry point — typically when the stock breaks through the 10-week line in big trade. If the trade does not work out, cut losses at 8% or less.

The rally attempts to the 10-week line following a big sell-off take place because bulls in the stock still exist. They see an irresistible opportunity to load up at “cheaper” prices. Yet at some point, more sellers flood the market.

Reliance Communications (RCOM), which expanded cellular telephone services across India, lit up the stock market with stellar gains from 2006- early 2008. 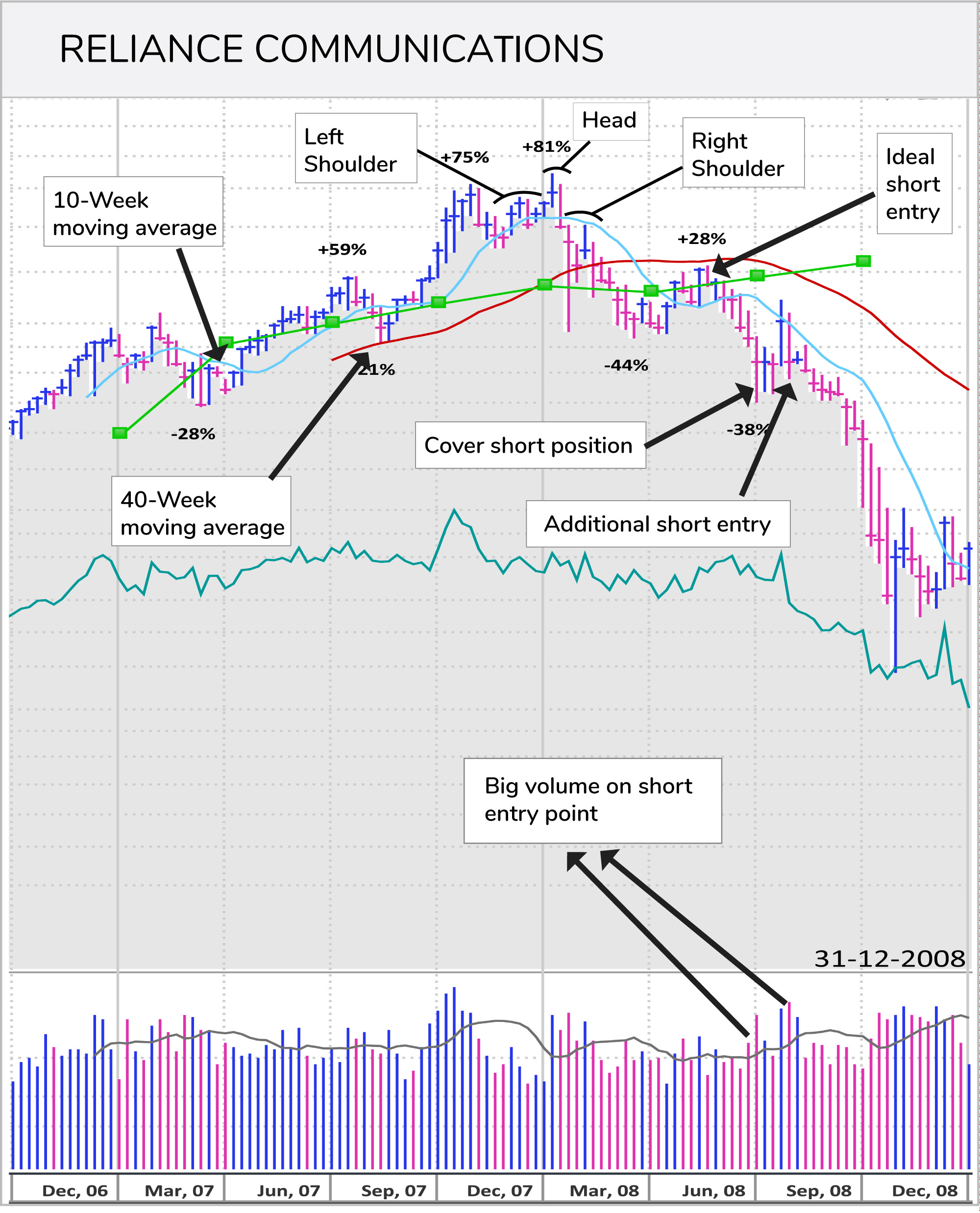 The telecom operator rose more than 120% from its listing price on the way to a peak of Rs 792.80. But during late January to mid March of 2008-Year Six of major bull market –RCOM sold off fast.

On January 21 and 22, 2007, RCOM went into free fall, sliding more than 6% each and closing further below its 50- and 200-day moving averages in monster volume. That was the wrong time to sell shares short. When it’s obvious that a stock is weak, bulls and market come in and bid the stock up hard. Some shorts cover.

Over the next nine sessions, the stock rebounded 19% but failed to stay above the 10-week line. After another sharp dive, RCOM tries to reclaimed the line, but not for long.

This ebb-and-flow action created the right shoulder. The right time to sell short came in the week ended 6 June 2008, when RCOM slid 5% in the heaviest weekly trade in more than a year and easily crossed below the 10-week line near Rs 550. One could have covered the position six weeks later for a gain of as much as 21%.Today, RCOM trades under Rs 16 a share.