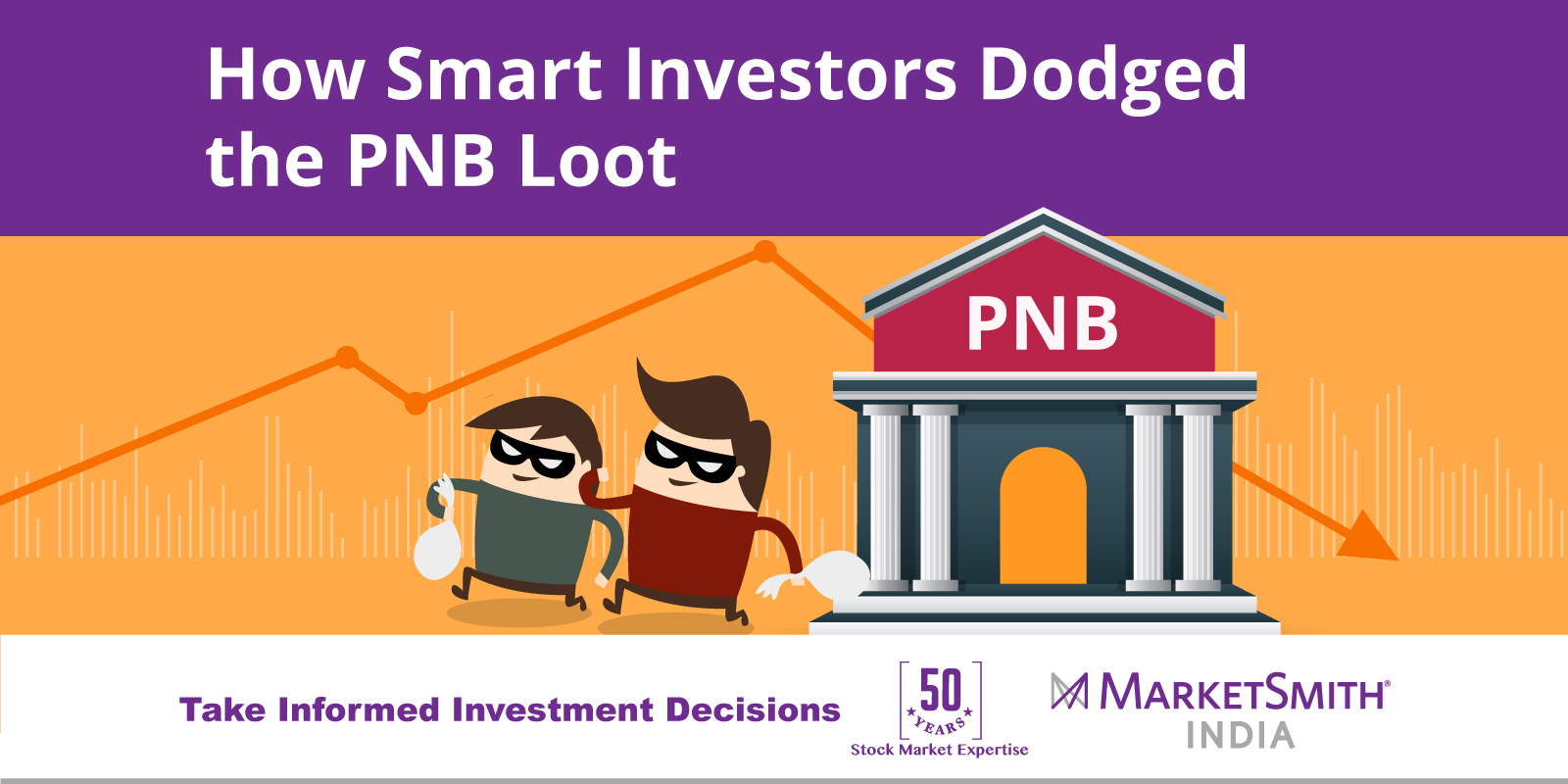 We Love You and Hope You Love Us Too: Investors to PNB

Punjab National Bank, India’s second largest state-run bank, stunned one and all with an unprecedented exchange filing on February 14, 2018. This is what it conveyed:

“The Bank has detected some fraudulent and unauthorised transactions (messages) in one of its branch in Mumbai for the benefit of a few select account holders with their apparent connivance. Based on these transactions other banks appear to have advanced money to these customers abroad. In the Bank these transactions are contingent in nature and liability arising out of these on the Bank shall be decided based on the law and genuineness of underlying transactions. The quantum of such transactions is USD 1771.69 M (approx). The matter is already referred to law enforcement agencies to examine and book the culprits as per law of the land.”

Now, pause for a second and think about this: PNB duped investors with Rs 11,384-crore fraud, almost one-third of the Bank’s market value, and that too on Valentine’s Day – What an irony!

How the PNB Scam Played Out

Let’s try to understand how the whole episode transpired:

What followed next was absolute carnage – PNB fell a massive 28% in the next four sessions, wiping off ~Rs 11,000 crore of investors wealth. Other public sector banks followed suit after they also reported exposure to the fraud. A wave of selling set in, as the Nifty PSU Bank index plunged a whopping 10.4% in four sessions.

Below is the extent to which PSU Bank components corrected from February 14 to 19, 2018: 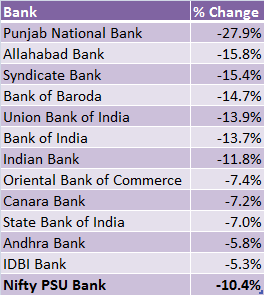 How Smart Investors Stayed Away

Rising NPAs and poor earnings growth have remained a cause of worry for PNB for quite some time now. In the past eight years, the stock has remained sideways and failed to generate any meaningful returns for shareholders. The stock did reward investors with 53% return in October 2017 on account of the recapitalisation boost. The Indian government decided to infuse a whopping Rs 2.1 lakh crore into public sector banks in FY 2018, compared to just Rs 1.5 lakh crore injected in the past three decades.

Despite the quantum of capital infusion, smart investors would have still kept away from the stock. It is quite logical. Why would a smart guy invest in business models that need external finance to fund future growth again and again? How is the business model sustainable if internal accruals are not sufficient to fund growth? A CAN SLIM investor would not consider a stock until there is strong double-digit sales and earnings growth backed by high return on equity.

While fundamentals looked certainly off for a majority of PSU banks, many naive investors would have got into them based on tips following the recap news.

As per the CAN SLIM method, such investors would have never purchased the stock in the first place. Even then, if those investors had employed the key selling rules designed by our founder, William O’Neil, they would have come out of the stock much earlier than the scam became known and sent the stocks crashing.

PNB Screamed SELL ME, Not Once or Twice but Three Times

Firstly, the stock’s breakout, which was largely fuelled by Indian government’s recap announcement, fizzled out soon. The stock fell more than 8% from the pivot price of Rs 185.80 and gave us our first sell signal – a failed breakout (1).

The stock next breached its 50-day line, although on low volumes. It managed to climb back above its 50-DMA and soon after there was a massive down day on January 25, 2018. The stock tumbled 7% on 2.6 times the average volume, which was the highest trading volume in the past 13 down sessions. Remember, it was on January 25 when PNB unearthed the initial fraud evidence.

The stock continued to slide and even breached its 200-day line on high volume on February 7, 2018 – the third major sell signal (3). This happened seven days before we all came to know about the truth. 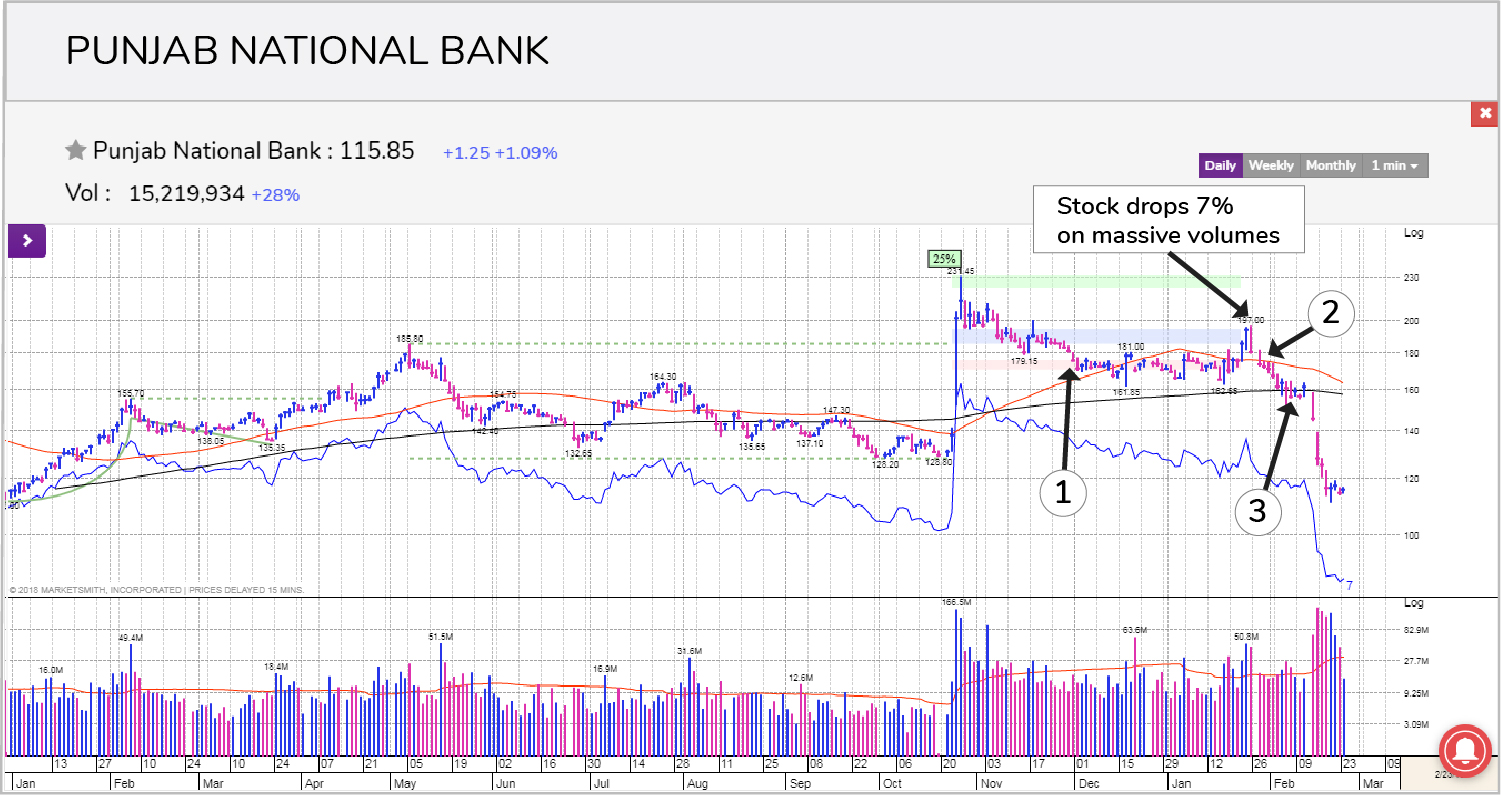 In addition to weakness in PNB’s technicals, the overall sector did not inspire confidence amid rising distribution. After the Nifty PSU Bank index rose to a two year high on October 26, 2017, the index pulled back sharply subsequently.

A quick look at the PSU Bank index data tells us that the number of distribution days had piled up to six in mid-December 2017 itself, and the index breached its 50-day line on December 27, 2017. Again, the signs of trouble were before investors much earlier than the February sell-off. A smart investor would have certainly avoided PSU banks considering an appalling Industry Group Rank of 113 at that moment. 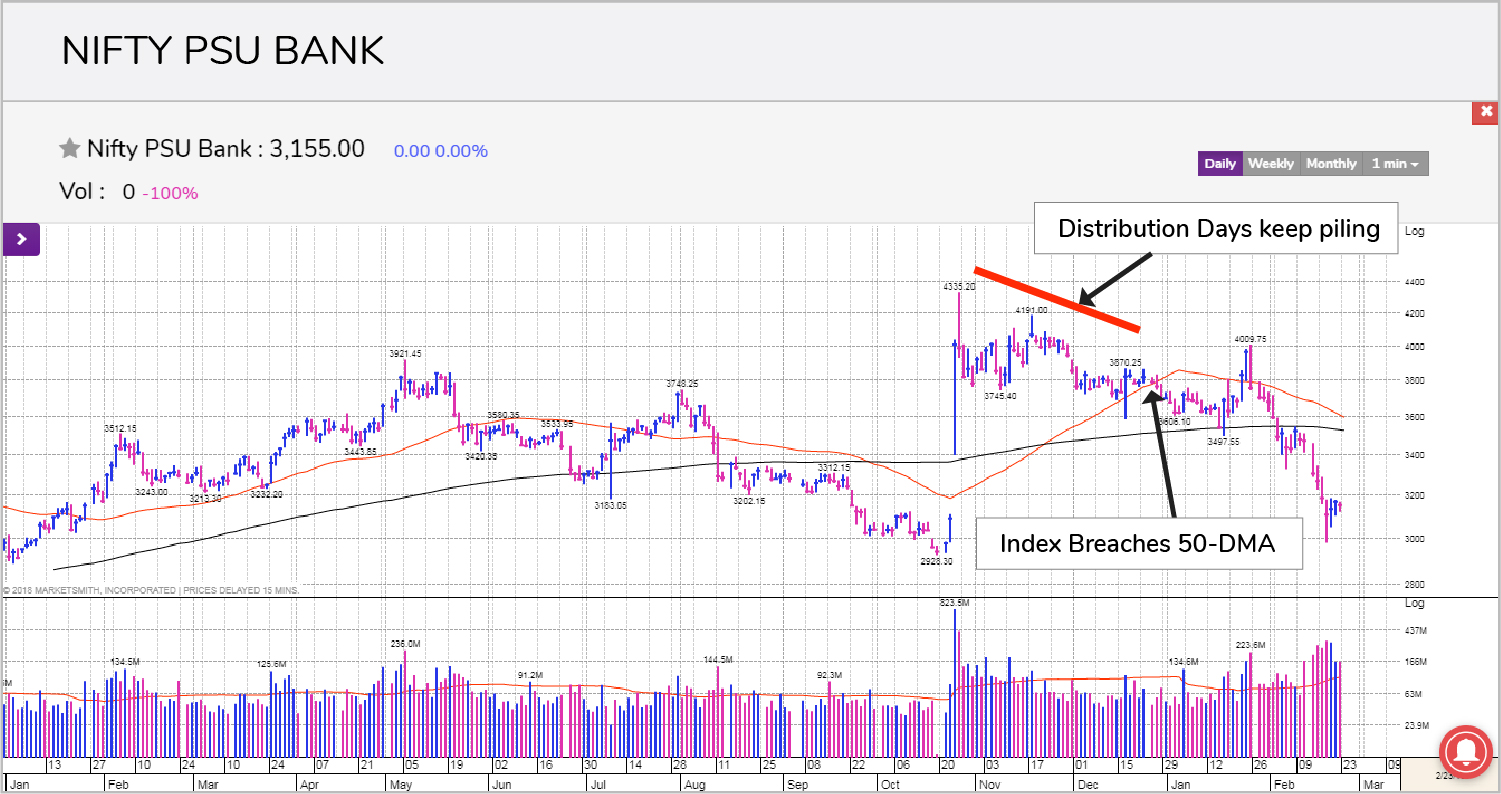 Concentrate on Fundamentals: Indian market is blessed with many high quality companies that report solid growth rates quarter after quarter and year after year. There is no point investing in fundamentally weak stocks hoping to make a killing by expecting the company to turn around and do wonders.

Price is a Leading Indicator: The age-old saying was proved once again in PNB’s case. A majority of PSU bank stocks started showing signs of weakness days before the scam was declared to the public. Those stocks breached their 50-day lines on heavy volumes, thereby providing early signals. The PSU Bank index had witnessed heavy distribution as well. Investors who remained optimistic about the future of those banks would have ignored those sell signals and were caught off-guard. Always remember, price is a leading indicator and many stocks begin to fail well before the fundamentals suggest trouble.

Always Have an Exit Strategy: No matter what strategy you follow as an investor, you need to have an exit rule in place. Now, if you wait for fundamentals to deteriorate, you could be in a precarious situation of sitting in a bus that has broken down or a bus that might fall off the cliff. You might be able to argue with the market in the short-term, but over a longer period of time, the market seems to be always right.