Let us rewind back in time to September 2013. In the backdrop of Narendra Modi being declared NDA’s Prime Ministerial candidate, stock market bulls began loading up their stock holdings in anticipation of a strong government at the centre.

Prior to Modi entering the PM race, India’s stock market had little to write home about, considering the Sensex’ lacklustre performance in 2011 (-25%) followed up with a recovery in 2012 (+26%). By the end of August 2013, things were not looking great either, as the Sensex had declined 4.2%. Filled with hope and excitement of a purposeful leader driving India’s economic growth, the Sensex gained 9.2% in the final four months of 2013 to end the year in green.

The rally was not a short-lived one. The euphoria got carried forward and the market’s expectation turned into a reality after the NDA’s comprehensive win in the 2014 general elections. The Sensex remained in an uptrend for most part of 2014 and returned with a handsome gain of 30% during the year. With the Indian market extending its rally in the first two months of 2015, investors remained bullish about the overall market prospect. After scaling the 30,000 level for the first time on March 4, 2015, Sensex showed signs of weakness as the index retreated significantly from the day’s high and closed 0.7% lower on higher volume than the previous session. March 4 was a high-volume down day and therefore qualified for a distribution day.

A distribution day is defined as a decline of 0.2% or more in a major stock index (Nifty or Sensex) on trading volume higher than the previous session. A distribution day indicates unusually heavy selling by institutional investors, the heavyweights who largely set a market’s direction. Four or five distribution days over the past five weeks can give an early signal that stocks have topped and are heading for a downturn.

Over the next 12 months, investor interest remained subdued and the Sensex witnessed a sharp correction of 25% before getting back into an uptrend in the aftermath of 2016-2017 fiscal budget.

As an investor, one should exercise caution once a key market composite experiences four to five distribution days in a span of five weeks. This is because before topping out, market will show signs of fatigue in the form of distribution due to increased institutional selling and hence it makes sense to keep a close track on the distribution count.

Is the Indian Market in a Spot of Bother?

With India’s key indices scaling all-time highs, the Indian market is currently in a Confirmed Uptrend. The distribution day count stands at four on the Sensex and three on the Nifty. While the distribution count has not reached an alarming level yet, investors should keep their buying decisions reserved to high quality names only.

While many investors prefer looking at valuation multiples to predict market tops, we at MarketSmith India follow the time-tested distribution day concept to evaluate weakness in the market. That is because personal opinions that are tied to historical valuation multiples fail to capture the overall market sentiment.

“The market is made up of millions of people acting almost 100 percent on human emotion and personal opinion. It is crowd psychology on daily display. And—especially when it comes to the hopes and fears and pride and ego that drive so many investment decisions—human nature is pretty much the same now as it was in 1929 or 1636.”

The Case Against Valuations

Many market participants resort to Nifty’s price-earnings ratio to infer whether the Indian market is overvalued or undervalued. The Indian stock market peaked at a P/E of 23.8 in 2015, and investors who were fixated with Nifty’s historical high P/Es of 25.5 in September 2010 or 27.6 in December 2007 or 26.4 in February 2000 would have failed to identify the stock market top of 2015.

Also, the Nifty would have appeared overvalued to such participants at the beginning of this year, with Nifty P/E hovering around 23, much above the historical average of 19. Despite appearing overvalued from the perspective of P/E ratio, the index has appreciated 25% on year-to-date basis. 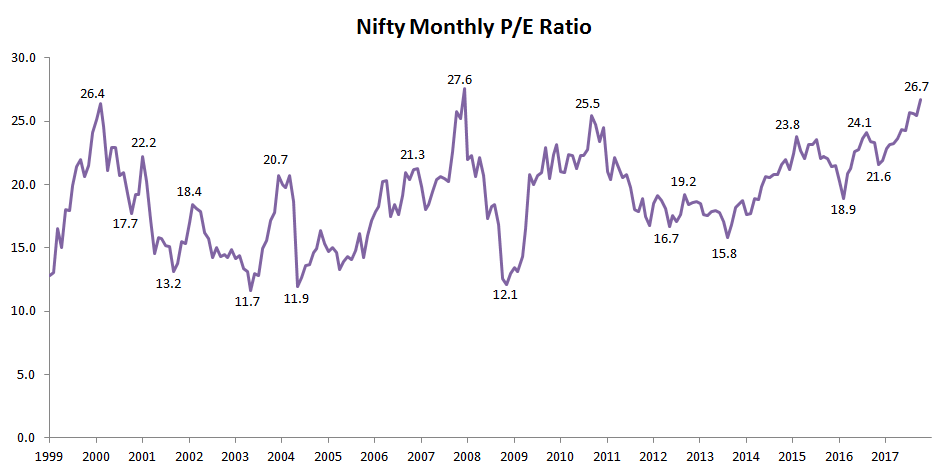 Moreover, the Nifty P/E multiple surpassed the 2015 high of 23.8 and 2016 high of 24.1 this year. Investors hooked to previous highs might have exited the market much earlier than they would have liked to, in hindsight.

Another widely used valuation measure is the price-to-book ratio, according to which the Nifty appeared undervalued at a P/B ratio of 3.1 in December 2016, compared with the historical average of 3.5. 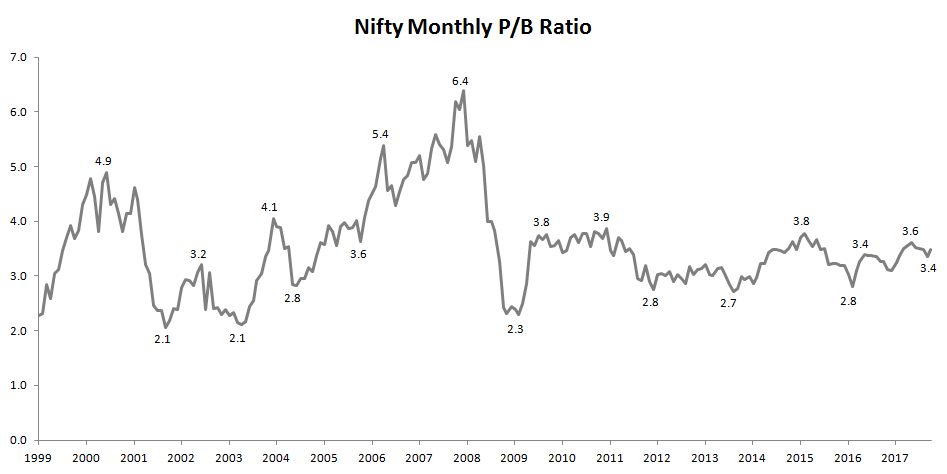 Well, price multiples are easy to interpret but not so easy to act upon. This is because there is no fixed multiple that would indicate an overvalued market or an undervalued market. As we saw in the above charts, the Indian market appeared overvalued from P/E perspective but undervalued from P/B ratio at the beginning of this year. A bull market could see valuation expansion beyond historical levels, and similarly a bear market could see valuation contraction below historical levels. Entering and exiting the market based on a fixed valuation multiple more often than not leads to entering the market much before it bottoms and exiting the market much before it tops.

Investors would be better off to rely on MarketSmith India’s market direction model, which puts into practice time-tested rules of identifying strength (follow-through day) and weakness (distribution day) in the market to gauge overall market direction.