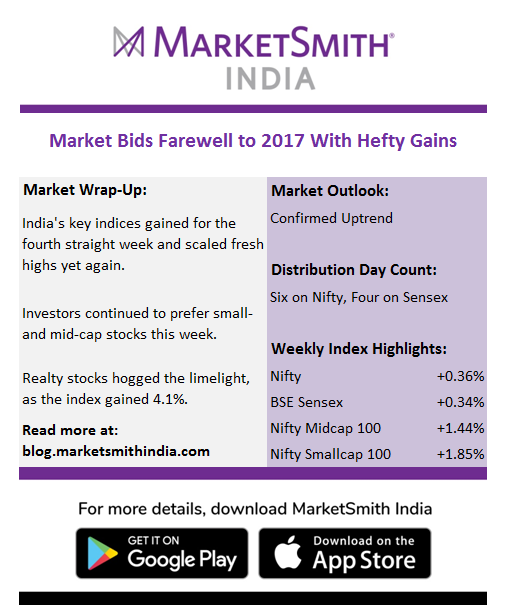 Two up and two down days

The market started the last week of the year on a cheerful note, however midway during the week both the indices lost some momentum which was mainly because the investors were lacking positive triggers and the F&O expiry on Thursday, both the indices made a an all time high on an intraday basis this week. Nifty and the Sensex finally bid farewell to 2017 with an yearly gains of over 28%.

The Nifty Midcap and Smallcap indices extended their gains as they made an increment of 1.44% and 1.85% this week.

The MarketSmith IND 47 Index, which lists the top 47 stocks based on fundamentals and technicals gained 0.78% this week.

Realty stocks hogged the limelight, as the index gained 4.1% during the week. The other top performing stocks for the week belonged to the pharma and metal sectors, which advanced 3.15% and 2.63% respectively.

This week the Nifty added one distribution day, thus taking the distribution day count to six for the while the count stands at four for the Sensex. Despite a high distribution count, India’s key indices are hovering around their all-time highs and are placed comfortably above the 50-day lines. In view of this, the Indian market remains in a Confirmed Uptrend.

Going forward, the market seems well-placed to continue its rally in 2018. We could be in for some volatility as the market approaches the budget season. However, the NDA government might try to take measures to boost rural spending.

That being said, it is important that investors keep a regular watch on their holdings because some of the indicators like increasing bond yields which indicates inflation risk is not good for equities market. If this is to be taken as a leading indicator, then it means higher inflation in the coming months will hit the companies unless they pass it to the ultimate consumers. However, going by the inertia in the equity market, a majority of the investors are expecting strong earnings in the upcoming quarters.