Three up days, two down days 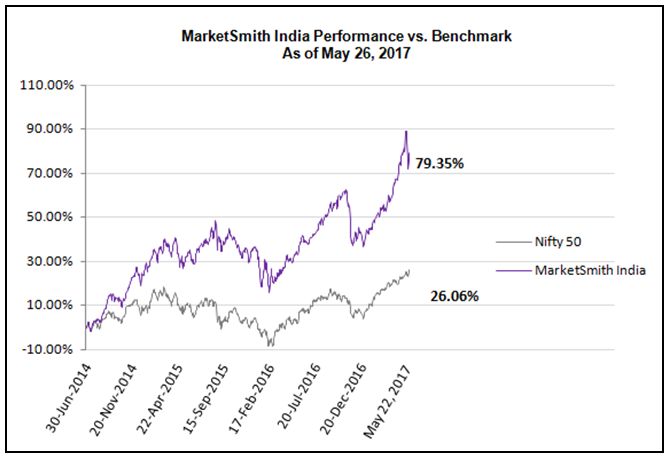 Following a slightly dull spell last week, the Indian markets entered an eventful week with key developments in the domestic and international markets. With rising cross border tensions between India and Pakistan, the index corrected for a couple of days. However, fresh buying was seen in yesterday’s F&O expiry, pulling the markets upwards. The key composites, along with Nifty Smallcap and Midcap, were able to trim the losses of previous sessions, but continue to be Under Pressure.

The indices scaled their all-time highs this week, boosted by macroeconomic data, government policies, and positive quarterly earnings data. The minutes from the Fed’s recent policy meeting signaled that they would hold off on raising interest rates until it becomes clear that the recent U.S. economic slowdown is temporary.

The Nifty and the Sensex currently stand 0.10% and 0.15% off their highs, respectively. Both the indices are trading comfortably above their 50-DMAs.

With a couple of positive days in the broader markets, the Nifty Midcap and Smallcap were able to trim some of their losses. However, they ended the week, losing 1.87% each.  The uptrend status of the Midcap and Smallcap indices, which are trading near the 50-DMA at 6.30% and 5.44% off their highs, respectively, was changed to Under Pressure this week.

The MarketSmith India IND 47 Index, which lists the top 47 stocks in chart and fundamental characteristics, lost 1.2% this week, underperforming the benchmark.

Coming to the sectoral performance, a negative outlook for the pharma sector, along with a poor earnings show by a few pharma firms, pulled the index down by 10.79% during the week. The top three gainers of the week were the Nifty FMCG, Private Bank, and Auto gaining 4.74%, 3.86%, and 2.9% respectively. On the contrary, other than Nifty Pharma, the other underperforming sectors were Nifty PSU Bank (-6.11%), Realty (-3.16%), and Media (-1.52%)

On the banking front, the RBI announced its plans to expand the scope and size of the oversight committee (OC) and is likely to modify the guidelines on restructuring loans so as to resolve the large stressed assets in the banking system. It marks the beginning of RBI’s step towards implementing Banking Regulation (Amendment) Ordinance, 2017.

From an NPA of just over INR 2,34 lakh crore in June 2014, the bad loans of 26 public sector banks has expanded to more than INR  6 lakh crore as of December 2016. The RBI deputy governor, KC Chakrabarty, stated that the actual NPA figures could be around 20 lakh crore, much higher than the official figures.

Cross border tensions with Pakistan dragged the indices down on Wednesday, but the markets shrugged off the negative development to scale new highs.

As per a government report, some of the benefits of demonetization were highlighted. Post demonetisation, cash worth approximately INR 5 lakh crore has been taken out of the currency system. The number of people who have filed self assessment forms for FY 2016-2017 increased 23.8% y/y.

About 91 lakh new assesses joined the tax base in FY 2016-2017. In the recent past, an increase in the number of assesses ranged from 20 to 25 lakh. Prior to demonetisation, about 1 lakh new pan cards were issued every day. Currently, the number stands between 2-3 lakhs.

On Thursday, oil tumbled nearly 5% after OPEC’s announcement of its plan to cut oil production failed to meet the expectations of the traders. The market expected OPEC to undertake a more comprehensive action to cut oil production. Despite the ongoing efforts led by OPEC to tighten the oil market by cutting production, the oil prices continued to dip due to a supply glut in the market.

The following events could serve as a market mover in the coming weeks:

Disclaimer: William O’Neil India Investment Adviser division, is one of the divisions of William O’Neil India Private Limited, which is a company incorporated under the Companies Act 1956. William O’Neil India Investment Adviser division is a registered investment advisor with the Securities and Exchange Board of India and through its online product, MarketSmith Indiaintends to provide quality equity research material and information to its customers. The investments discussed or recommended through MarketSmith India may not be suitable for all investors and hence, you must rely on your own examination and judgement of the stock and company before making investment decisions. Data provided through MarketSmith India is for information purposes only and should not be construed as an offer or solicitation of an offer to buy or sell any securities. Information and discussions made available through MarketSmith India contain forward looking statements that involve risks, uncertainties and assumptions that could cause actual results to differ materially from those contemplated by the relevant forward-looking statement. William O’Neil India Investment Adviser division or its employees / directors or any of its affiliates are not responsible for any losses that may arise to any person who has made investments based on the contents of this document. Past performance never guarantees future results. Investment in equities are subject to market risks and despite the best efforts to provide market leading research, William O’Neil India would like to exhort its users to acknowledge and fully understand the risks involved which might include but not limited to loss of both principal and income. Data and content provided through MarketSmith India is to be consumed only by the intended recipient and must not be redistributed any further.