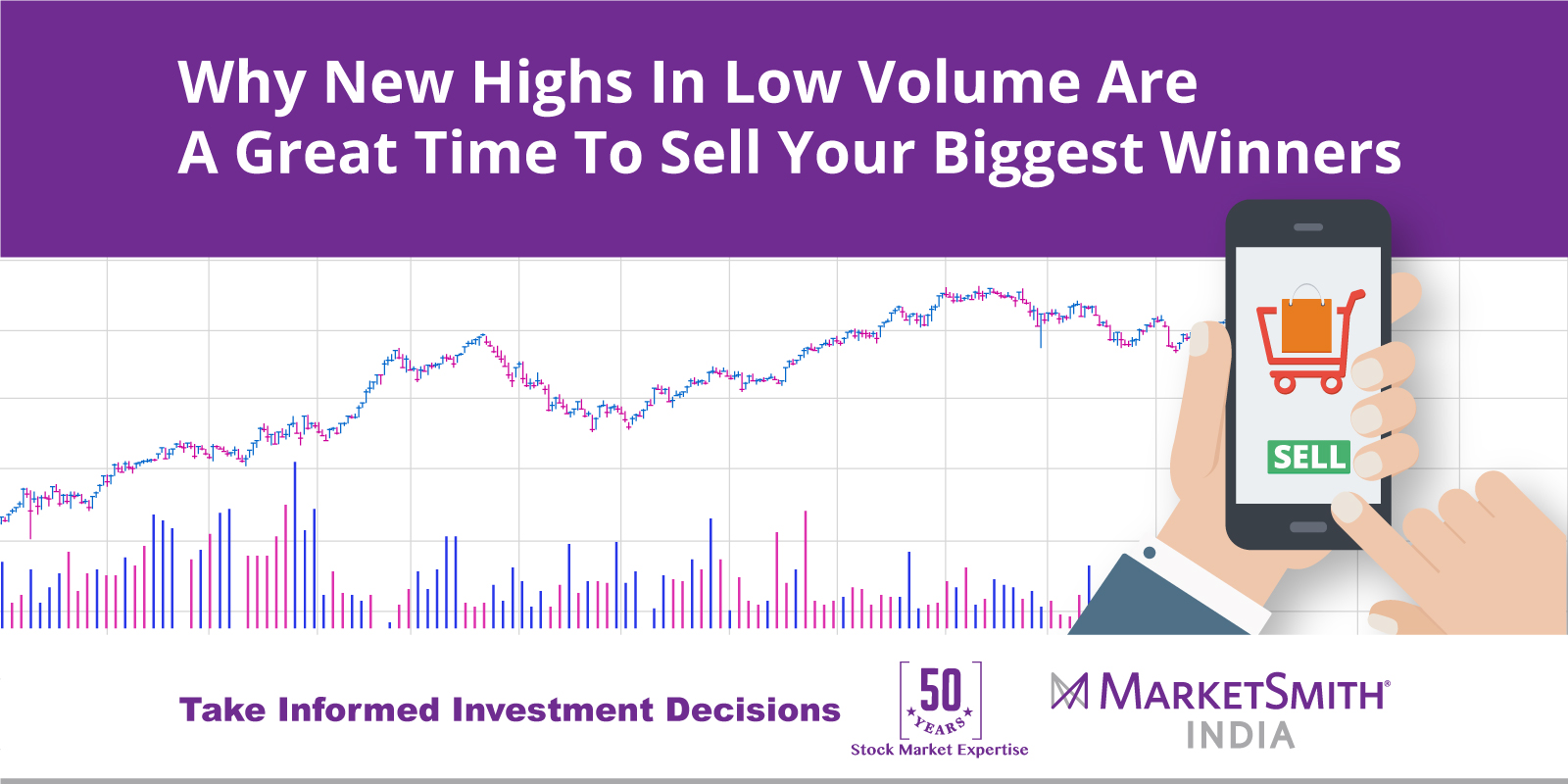 In the stock market, a great company is like a Porsche car, and volume is the stock’s fuel. You can blather all day about the company’s potential, its fabulous new product, its incredible CEO and so on.

But if the company’s stock, after making a great run, begins to hit new highs on light or simply average volume, the stock will likely cease to act like a high-performance roadster. In fact, the stock may be beginning to put on the brakes on its spectacular run.

When new highs keep occurring on low volume, it is prime time to be watching for serious sell signals.

The Difference between Heavy Volume and Light Volume

Please go to a daily chart at MarketSmith India and look at the bottom part of each chart. Each thin vertically-aligned bar represents how many shares a stock traded each session. It is easy to tell on any given day whether trading increased vs. the prior day, decreased, or stayed virtually the same.

Now look at those volume bars again. See the 50-day average volume line, drawn in red, draped across the high end of those volume bars? The level of that line shows how many shares exchanged hands each day over the 50 most recent trading days. It is called a “moving average” because after a session on Dalal Street is over, a new daily volume figure has been born. Thus, a new average over the past 50 days is created; the average keeps moving.

The 50-day moving average makes it easy to spot trends in turnover. The same goes for the 10-week moving average, which shows typical weekly turnover over the past 10 weeks, on a weekly chart.

A stock’s volume often tracks above its 50-day average when a stock’s price climbs to new high ground. This is where this stock has never been before. There is no overhead resistance, and buyers should be luring offers with their increasing bids.

If this doesn’t drum up increased volume, you have a problem. Remember, too, that the uptrending stock already has had institutional support behind it. That’s how it got to be an uptrending stock.

What do you think would happen if the big-money funds stopped buying? The stock would fall under its own weight.

And if you see that stock consistently making new highs without solid volume, that’s a sign that the tide may be turning. That is, sellers may have more influence over the stock’s future prices than the buyers.

When IFB Industries Took a Breather

Ifb Industries shows how volume served as a gauge for the stock’s health.

One of India’s fast-growing players in the home appliances space, IFB Industries built a cup-withhandle from July to October 2017. During the base formation, the stock witnessed multiple sessions of accumulation, while down days came on light volumes.

IFB Industries broke out on October 10, 2017 (1) and the stock witnessed massive accumulation as it doubled in less than two months. While the stock made a new high of 1,500 on December 4, 2017, the volume was below-average (2). Moreover, the stock closed near the day’s low and in negative territory.

You could have taken that as a serious warning from a well-behaving stock.

The stock remained sideways for one whole month and while it made a new high on January 11, 2018, IFB Industries came under pressure on account of sell-off in India’s midcap and smallcap indices. The stock breached its 50-day line and even corrected by almost 30% in subsequent sessions (3). 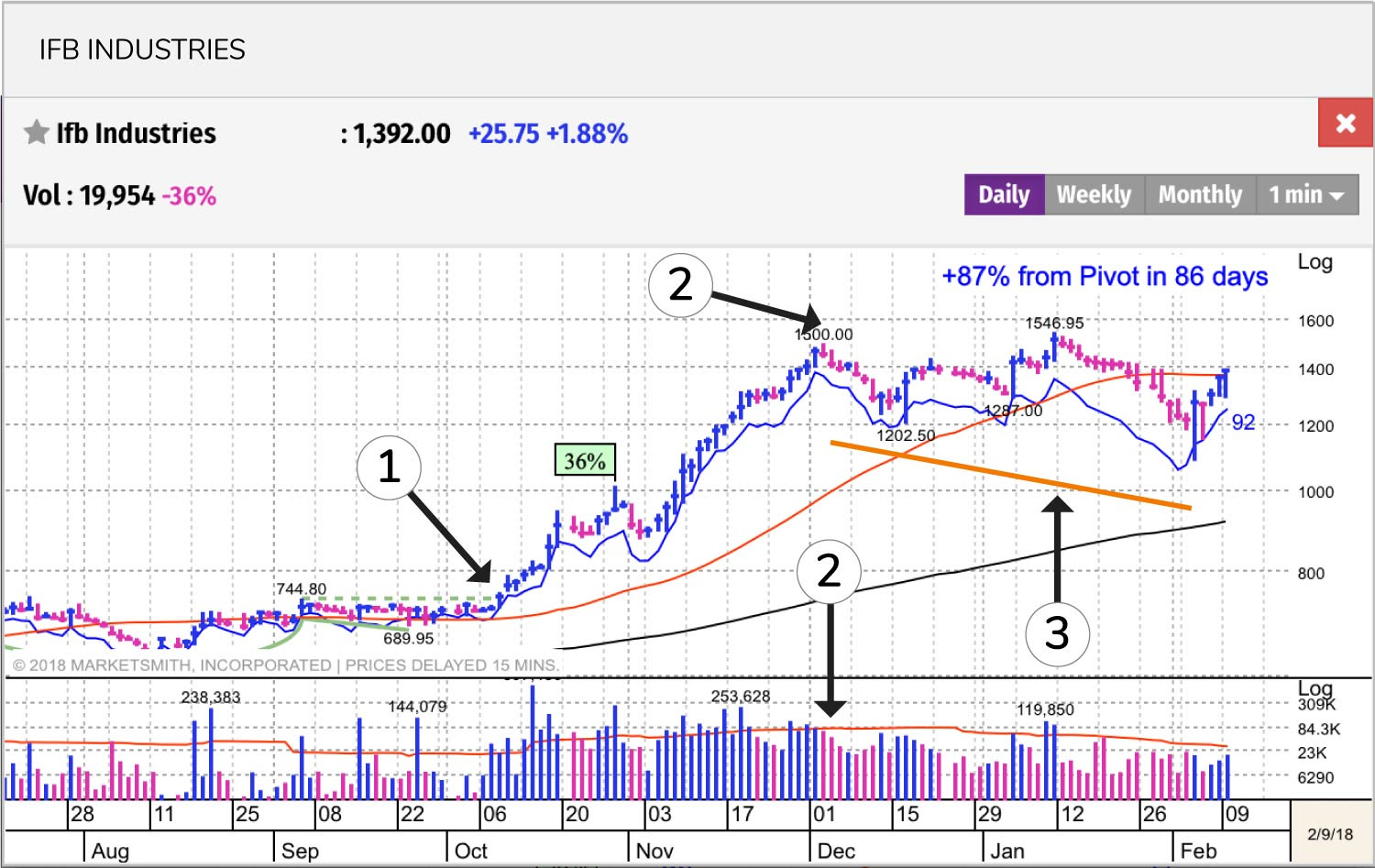