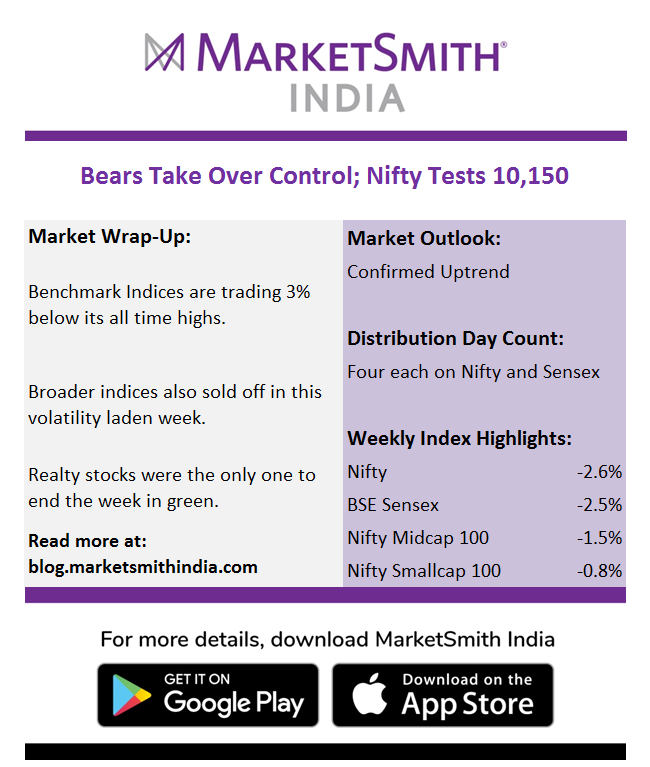 One up day, Four down days

Indian Market witnessed some heavy distribution this week, as the Nifty and the Sensex are trading 3% below their all-time high. The Nifty has breached its 50-DMA, and it is trading marginally above its key support level of 10,120. The sell-off in the market could be attributed to Korean tensions, F&O expiry, and the September Quarter GDP data, which was announced yesterday.

Broader Indices also sold off this week; the Nifty Midcap indices lost 1.46%, while the Smallcap gave fell 0.77% in this volatility-laden week.

The MarketSmith IND 47 Index, which lists the top 47 stocks in chart and fundamental characteristics, outperformed the benchmark indices and gained 0.73% this week.

The macroeconomic data, announced yesterday, reported the September Quarter GDP at 6.3%; while the fiscal deficit increased to 96% of the budgeted target, for the fiscal year ending March 2018.

The following data to be released on December 6, could turn out to be a market mover in the next week: