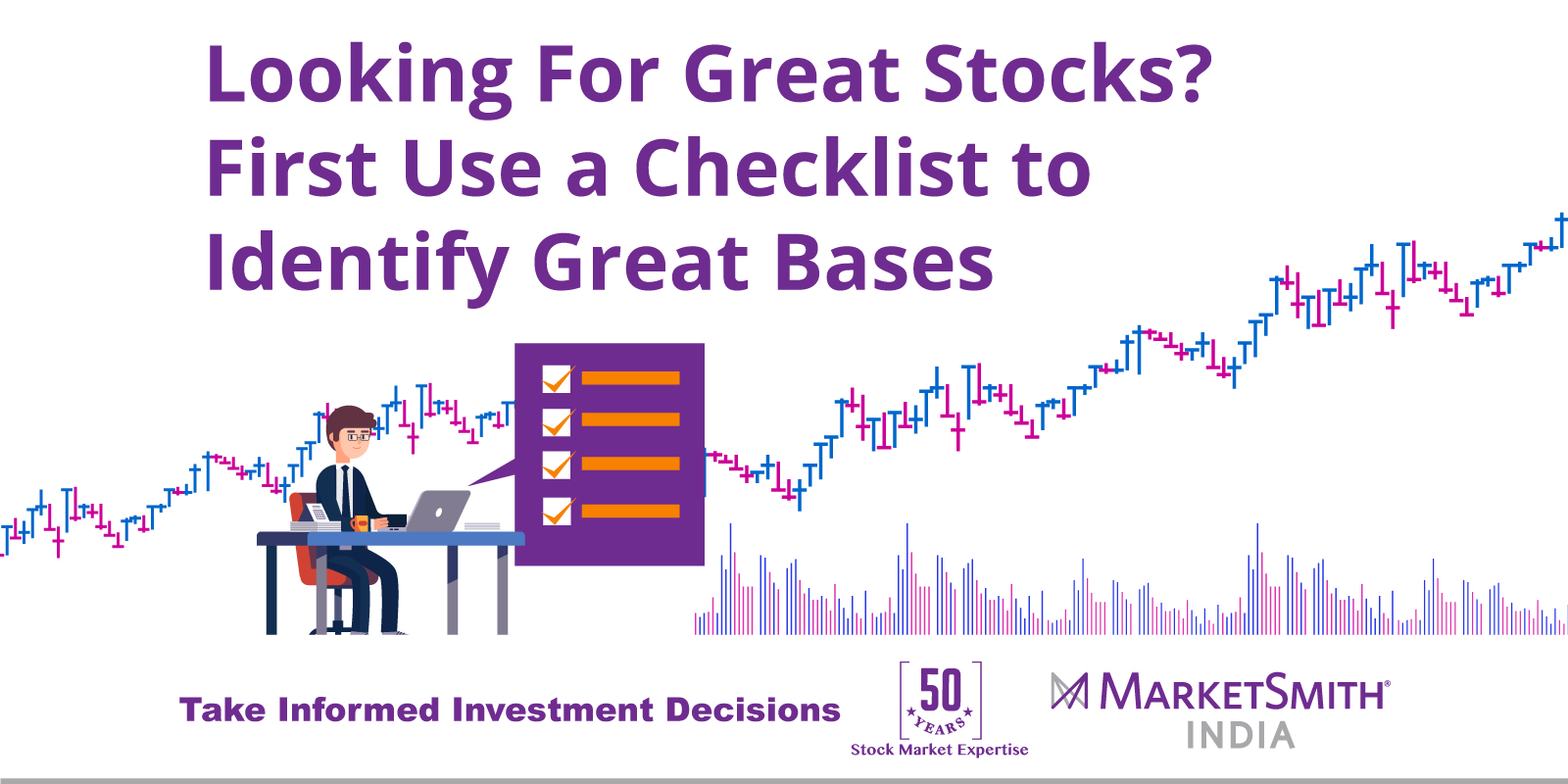 Before you travel a long way, you make a checklist of what to do. You pack clothes. Ask your neighbour to collect your mail. Lock all the doors. Then finally you go. By checking everything off your “to do” list, you eliminate many unnecessary bumps along the way.

Adopt a similar mindset when you prepare an “investing trip” with a growth stock.

With MarketSmith India’s research tools, you can quickly build a watch list of potential market stars. But your work does not end there. To raise the probability of notching a 20% winner here and a 200% screamer there, you need to devote time to identify stocks that already show signs of strength.

A stock base pattern serves at least two vital functions. One, it marks the beginning of a resting phase for a stock that has already moved sharply higher. This resting period can last as little as four weeks or as long as 65 weeks or even longer. The base gives big investors a chance to pick up shares as others unload their shares to cash in gains.

Once the herd of desperate sellers disperse, a new crowd of hungry buyers sends the stock catapulting to a new advance.

Whether you are a beginner or a veteran CAN SLIM stock picker, you can always benefit from this checklist to help you sort among your stock candidates and increase your profit potential.

• Did the stock make a run-up of at least 30% before beginning its base? You want to see evidence of a stock’s ability to rally with vigour before you invest your hard-earned cash. If a stock has already broken out of a first base, it needs to gain at least 20% before settling into a new pattern.

• Does the base meet the minimum required length of time? A flat base needs at least five weeks, a cup six weeks, a cup-with-handle or double bottom seven weeks. Long cups and saucers can form over a year or longer.

• If there is a handle, did it form in the upper half of the base? Use the midpoint test. Add the highest price within the handle to the lowest price and divide by two. Find the midpoint of the base. The handle’s midpoint should be higher.

• Are there signs of accumulation? Did the cup base form smoothly? Was the depth of the cup within limits?

Look for weeks in which shares rose on heavy volume. On a daily chart, gap-ups in strong volume are a plus. A cup should in most cases show a decline of no more than 35%. Flat bases have a dip of less than 15%.

One of India’s leading financial services company, Edelweiss Fnsr. passed this checklist in the early late 2016. From January 2015 to April 2016, the stock moved like a sitting duck. However, the stock ramped up 108% from 61.75 to 128.80 during May-October 2016 on the back of solid earnings growth and a rally in NBFC stocks.

Following the footsteps of other growth stocks, Edelweiss took a beating as the Indian market came under massive selling pressure in the aftermath of demonetisation. The stock faded in November 2016, starting a 17-week long cup-with-handle base pattern. It fell 36% from the base’s high to low.

While the base depth was marginally higher than our liking, it was yet reasonable considering many leading stocks had fallen much more. On a closer look, the stock witnessed selling on low volume, while up days came on massive volume, indicating accumulation within the base (1). One more key point to observe is the strong support that the stock found near its 200-day moving average (2).

Edelweiss formed a handle in early February 2017, which saw a massive dry-up in volumes. The handle was also formed in the upper half of the base (3), ticking one more box in the checklist. Once the final set of weak investors was bored out during the handle formation, the stock broke out into new highs and delivered an impressive return of 134% in the next nine months.

While the stock’s gains can be largely attributed to the Company’s strong earnings profile, its cup-with-handle base pattern had ticked all the boxes in the checklist of a great base pattern.

In the current environment, a majority of growth stocks would go through a resting period and build base patterns as the market works its way through a bottom. This is the time when the next set of big winners would prepare themselves for huge price advances. As CAN SLIM investors, our focus should be on screening quality stocks with strong earnings profile. Once the market reverses trend, those quality stocks would be the first ones to lead the market rally. And the base checklist would come in handy in quickly analysing whether a particular stock has built a great base pattern.